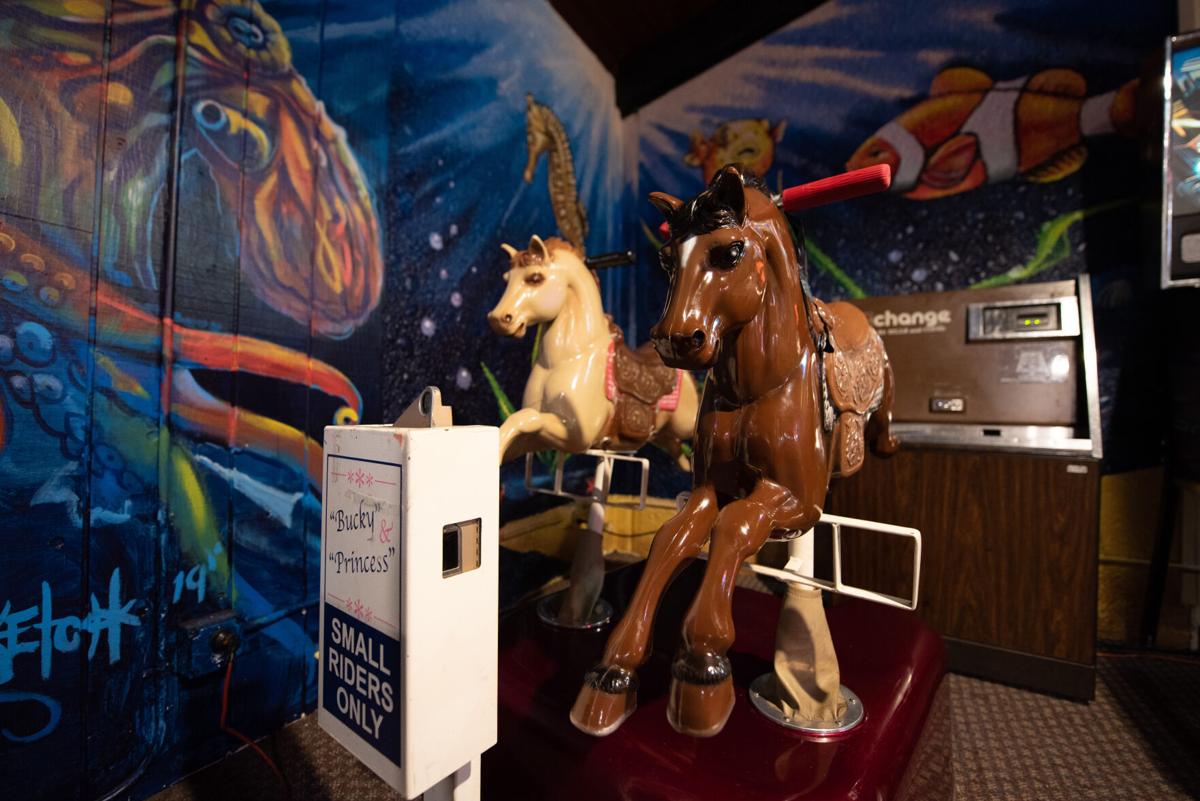 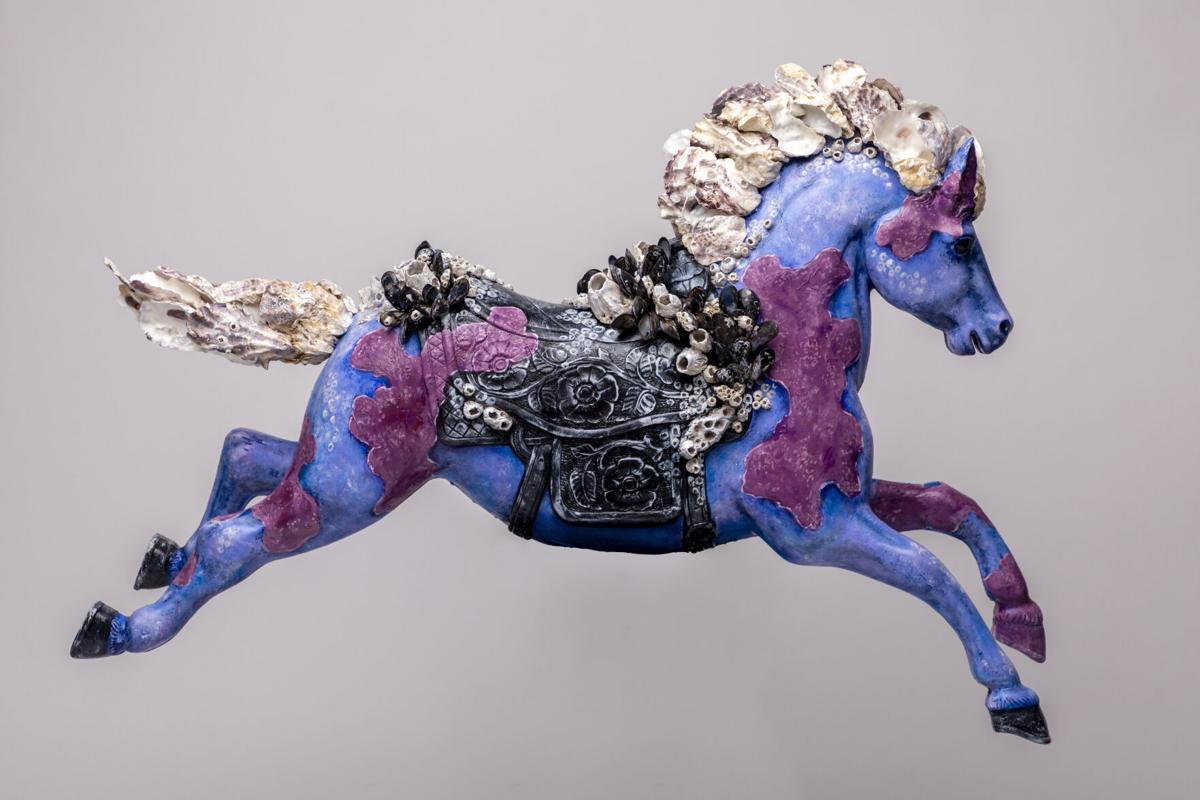 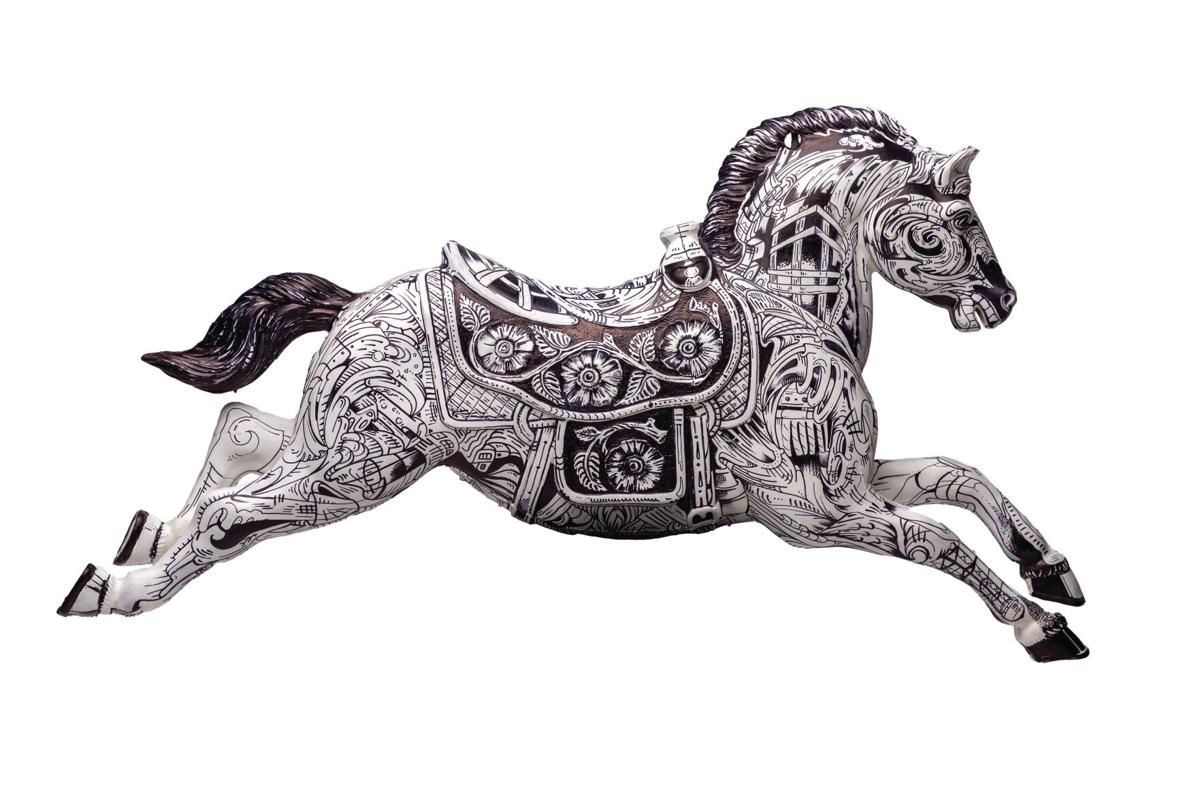 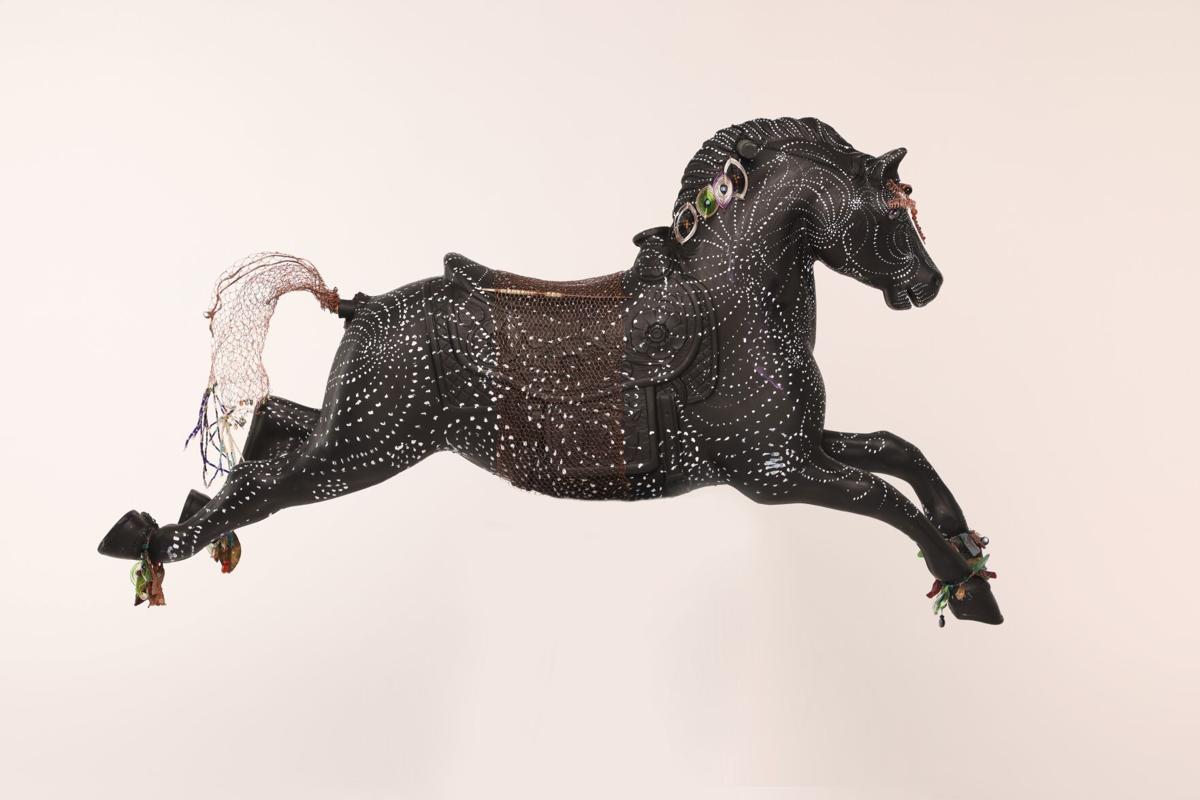 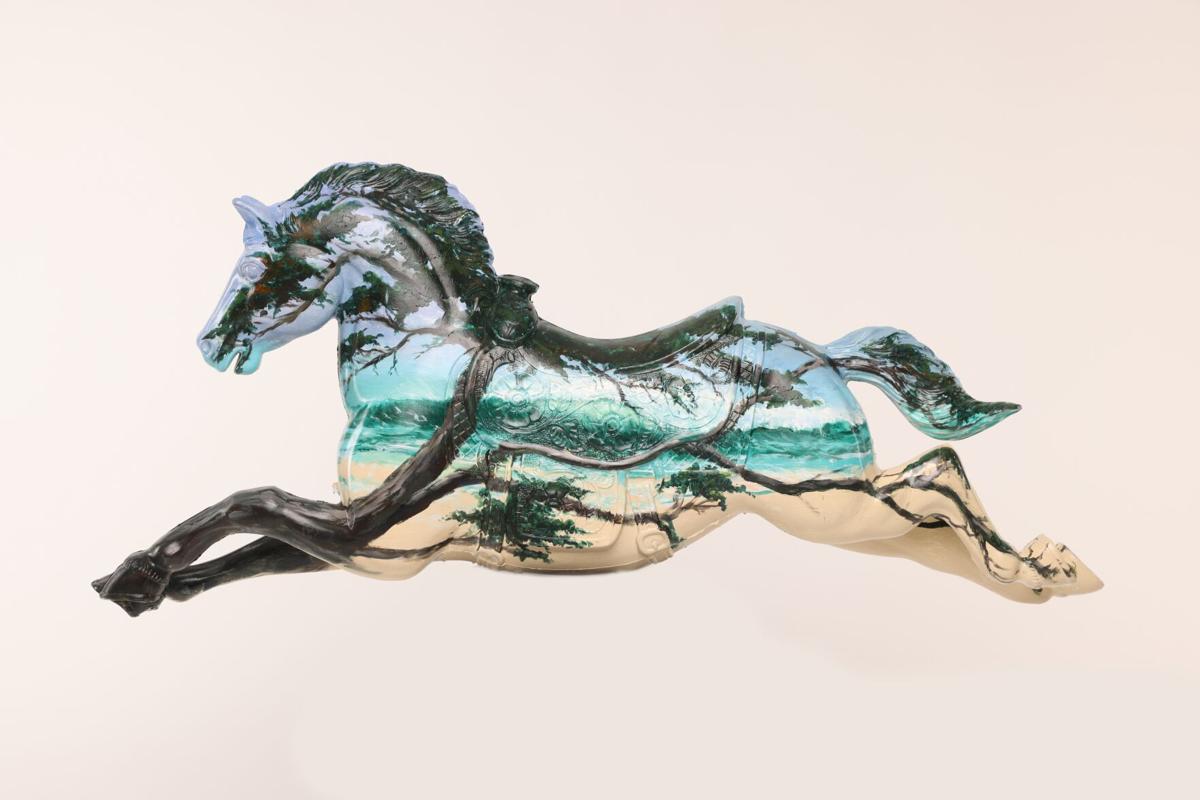 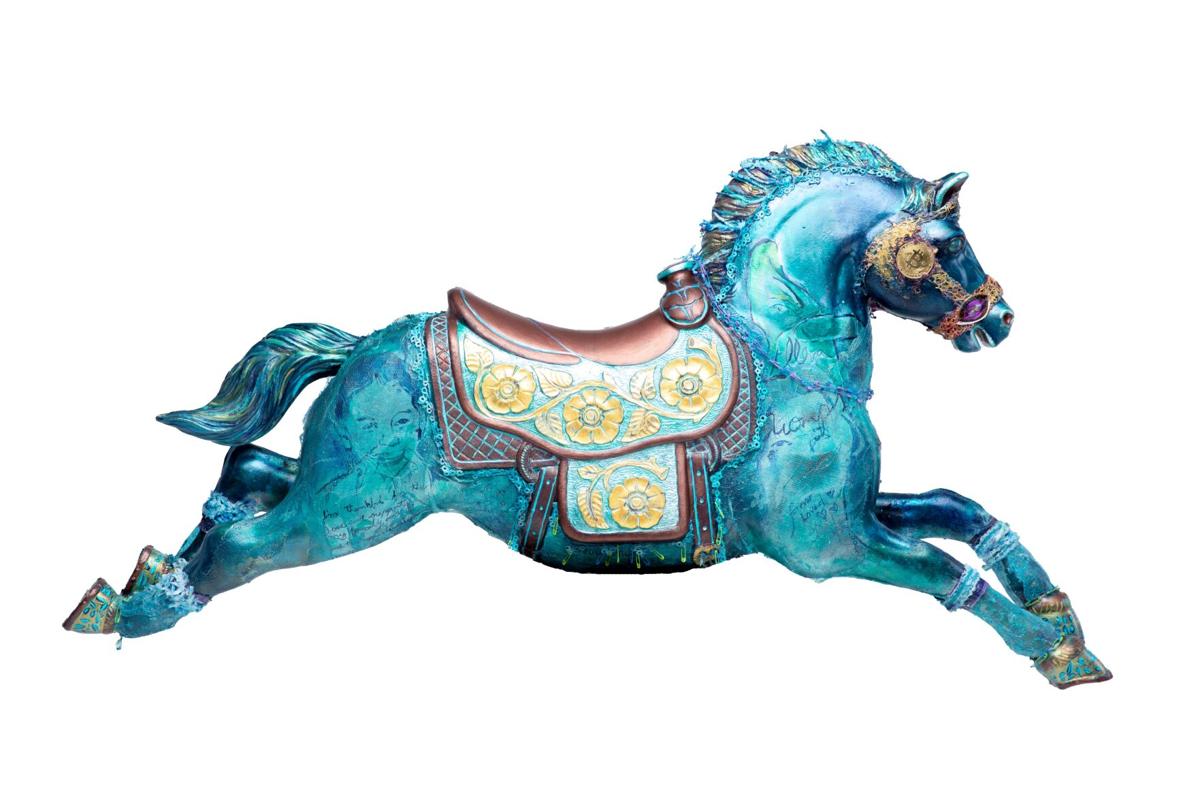 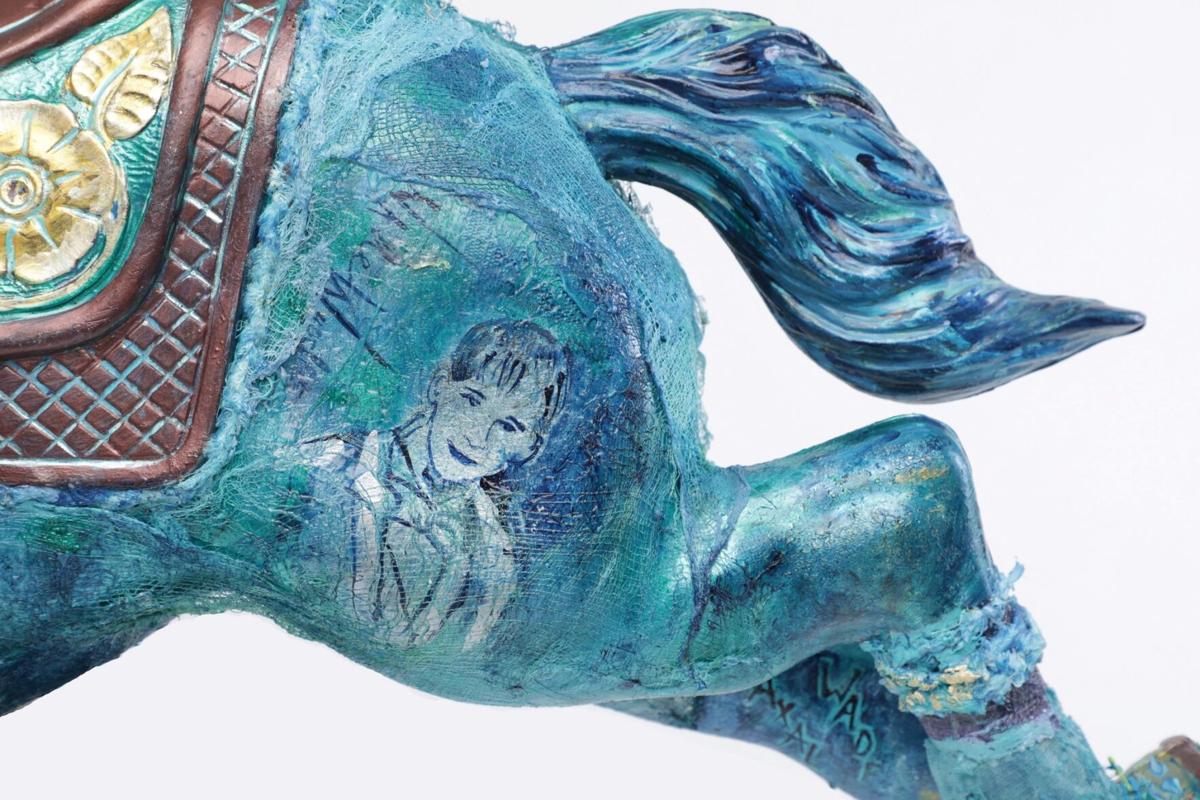 There was romance in the air, and ponies on the horizon in August of 1993 when Talley Winthrop went on her fifth date with her future husband, John Woodmark.

Over dinner John revealed he owned an eclectic herd of quarter horses. John invited Talley to ride along with him to pick up his “lease payments,” and meet his unique herd: 250 mechanical kiddie ride ponies, each of which required a 25¢ payment to ride… hence, the “quarter horse” designation.

Fast forward 30 years, long after the ponies had been retired, the Woodmarks were long-married. Thirty or so remaining ponies were stabled in the Woodmark warehouse, high above on a dusty, moldy, shelf. Talley’s creative eye began to formulate an artistic vision – one where each of the ponies would be refurbished, restored, and re-imagined. Thus, the Pony Up! Quarter Horse Project was born!

The finished works will be sold at virtual auction, with 100% of the profits to benefit the Wade J. Woodmark Foundation of Depoe Bay, Oregon, an NPO honoring the late son of John and Talley Woodmark, who passed away in 2005.

The first project pony galloped off to Mission Viejo, California, where renowned landscape artist Lee Munsell created “A Mighty Rushing Wind.” Over the next year, several Oregon Coast artists lassoed their own ponies as part of the project.

Meanwhile, back at home, Talley, and friends Jenn Graham and Margaret Boone are hard at work on a pony triptych utilizing Ponderosa Oregon sunstones, leather work, and creating a tribute to a sister lost too soon. In total, over 30 ponies have galloped off to artists across the United States, England, and Australia.

Many ponies are corralled at the Silver Heron, Blue Heron, and Purple Starfish, in Depoe Bay, the Newport Branch of Umpqua Bank, and the Bridgewater Bistro in Astoria. Colin M. Park is the official project photographer, whose work will be featured in the limited edition coffee table book. Photos may be seen on the Pony Up Quarter Horse Project Facebook page. Bids may be placed by contacting Talley@SilverHeronGallery.com, or on the PUQHP.com, currently under construction.

Tip of the Week: Spay and Neuter Your Pets

Pet owners can help solve our community’s pet overpopulation by spaying and neutering their pets.