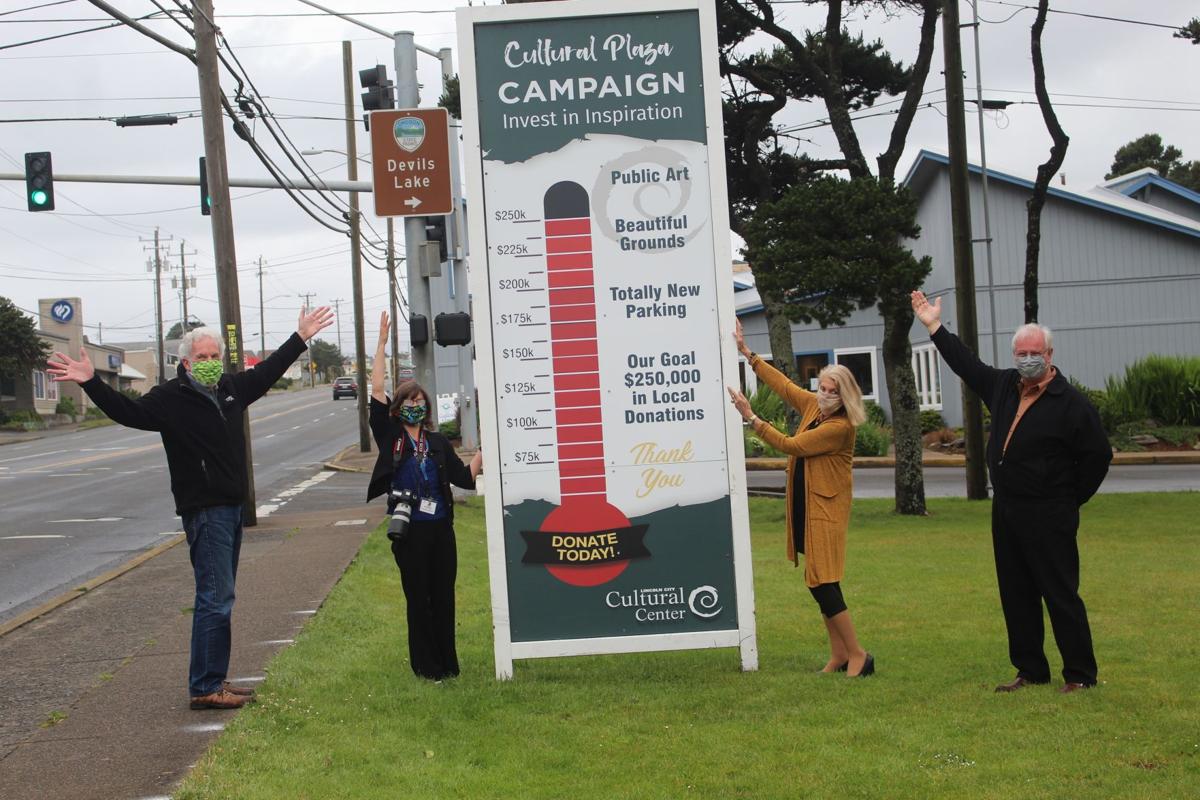 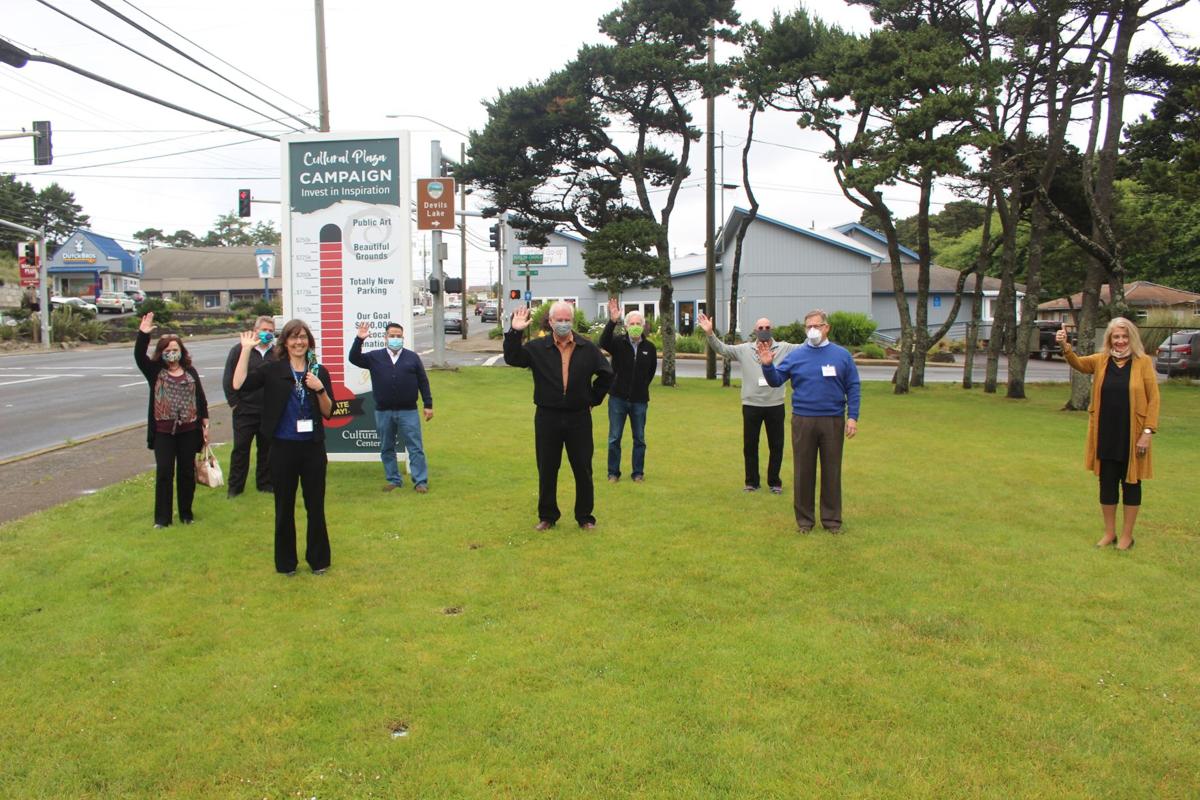 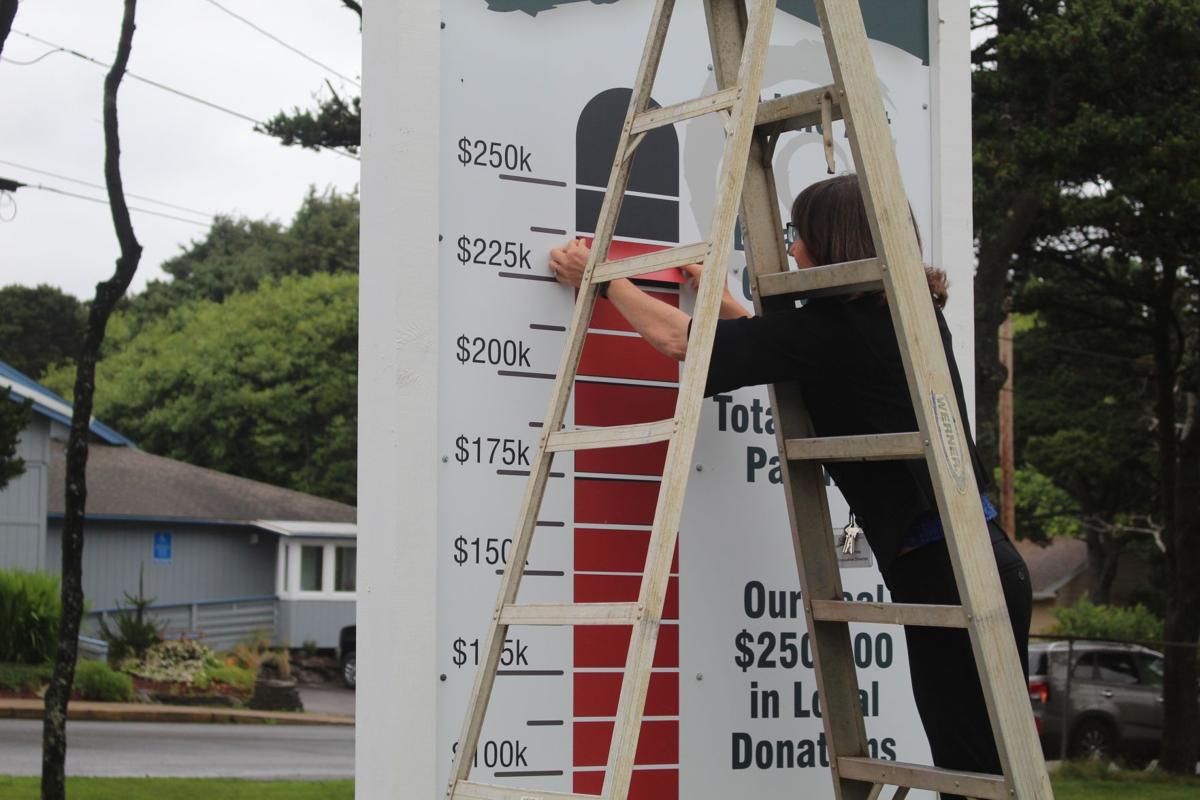 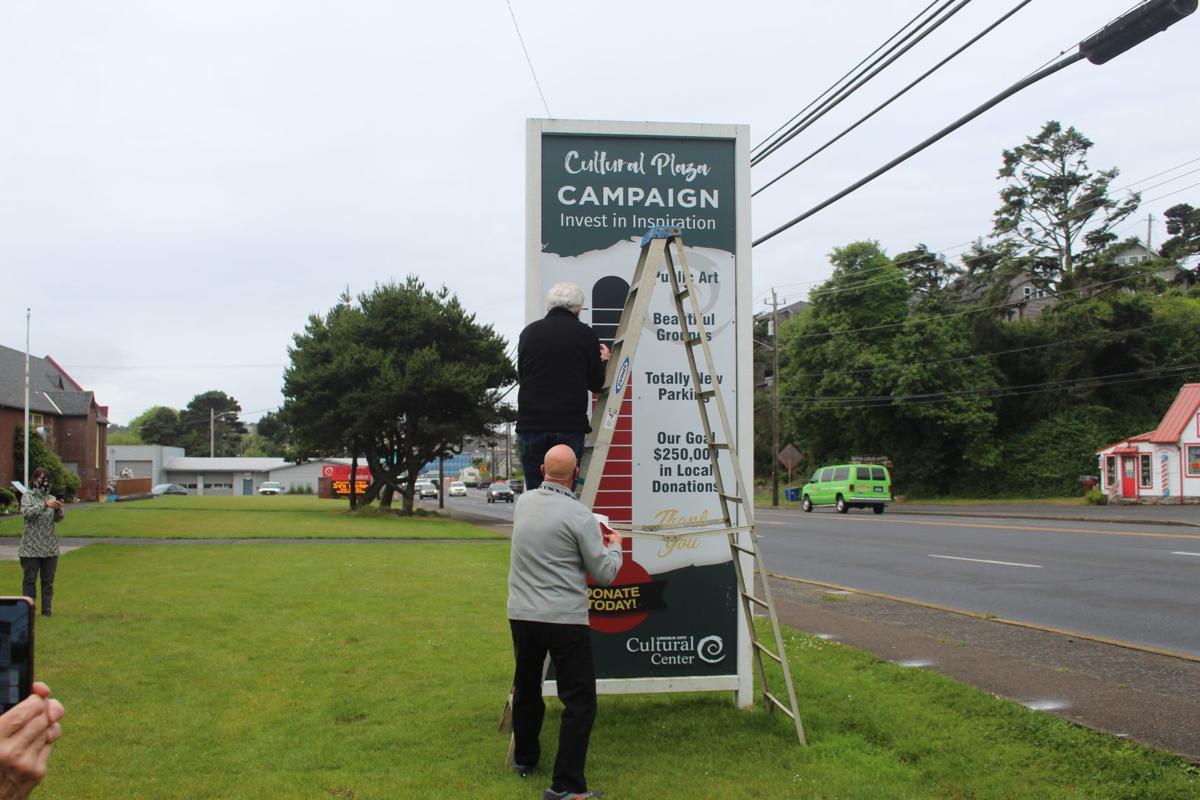 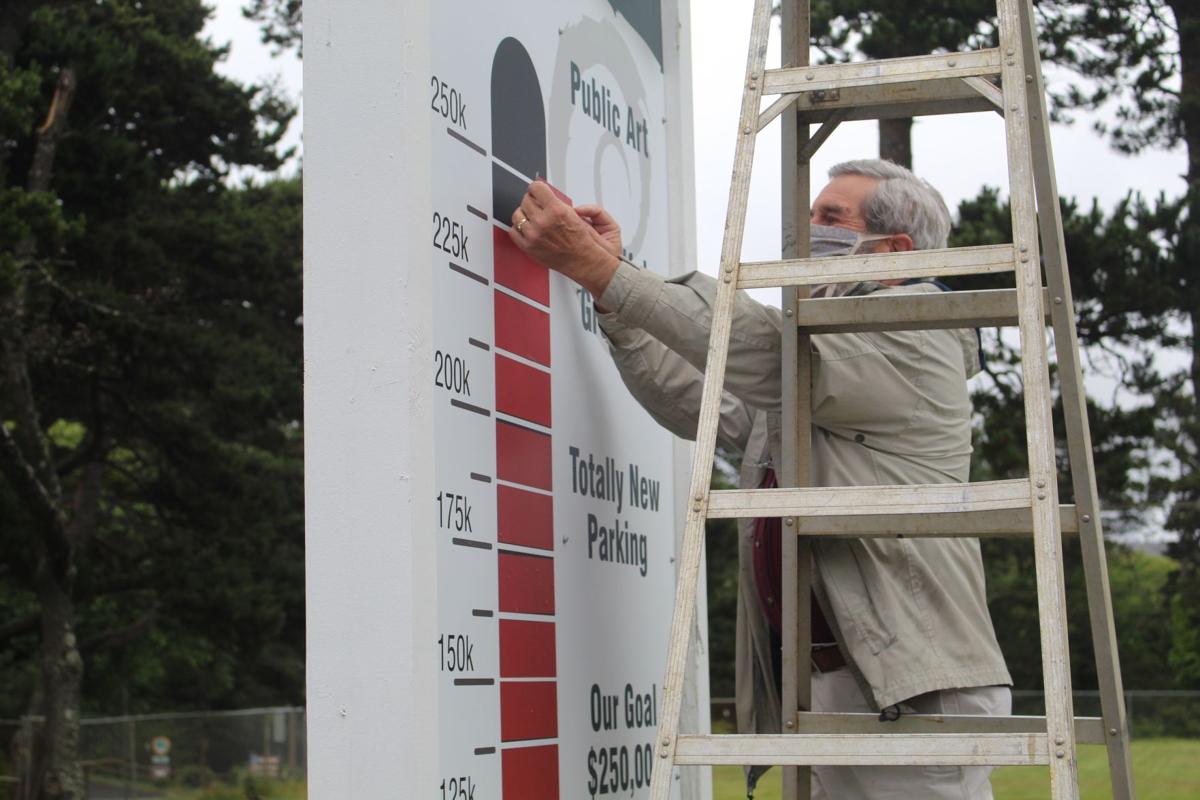 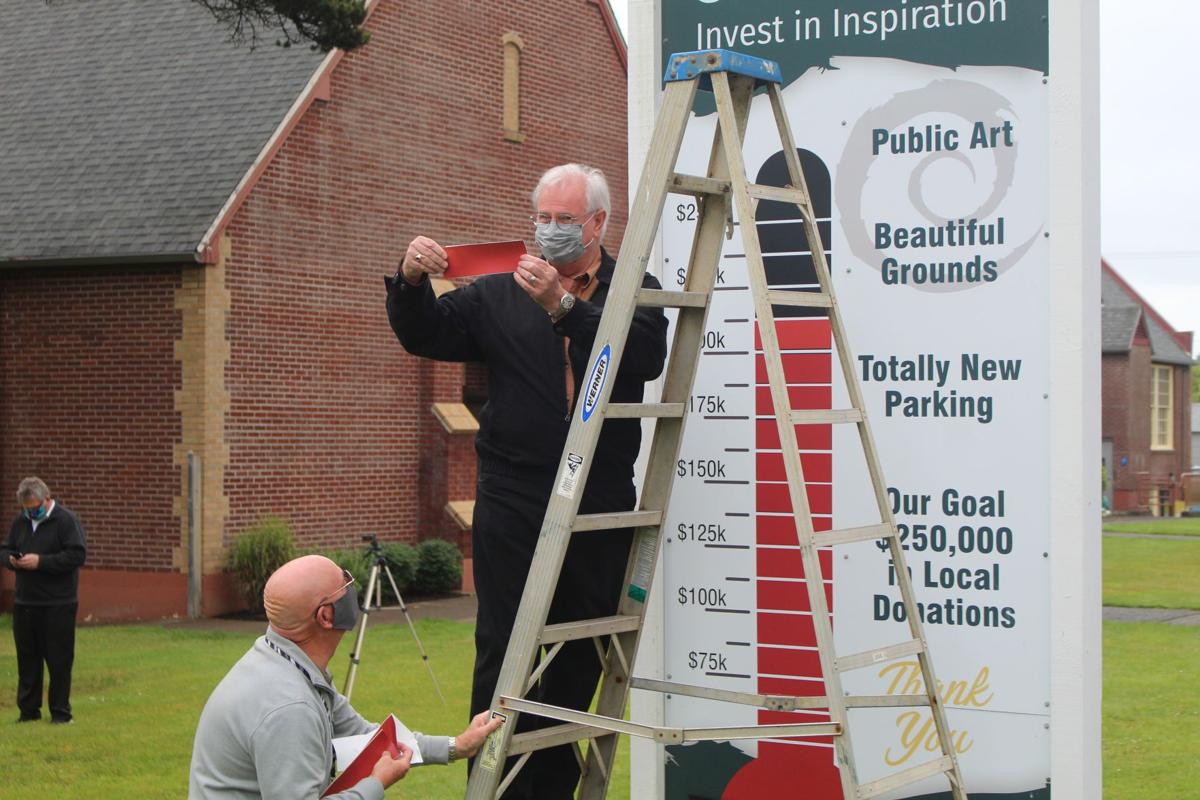 The Lincoln City Cultural Center Board of Directors gathered on the center’s lawn Monday, June 15, to make an important and hopeful announcement to the community: the center’s Invest in Inspiration Capital Campaign Goal has been achieved.

Board members took turns adding red bars to the fundraising thermometer sign, signaling to the community that the ambitious goal ($250,000 in local donations) has been achieved.

It’s been 12 months since the nonprofit Lincoln City Cultural Center held its official celebratory launch to the “Invest in Inspiration” Cultural Plaza Campaign. Accompanied by live music, speeches, tours and a presentation by the architects, the LCCC board announced their intention to raise $250,000 in individual donations toward the Lincoln City Cultural Plaza redevelopment project. They installed a thermometer sign on the front lawn and began the hard work of filling it up through donations and sales of commemorative bricks.

“All of us on the LCCC Board have been absolutely delighted with the incredible response from the community for the Cultural Plaza project,” said Dorcas Holzapfel, president of the LCCC Board. “There’s enthusiasm and excitement that the project has generated and a great deal of local pride for turning the grounds of the Cultural Center into a beautiful plaza for all to see and enjoy! The support to make this project happen and to bring beauty to Lincoln City is just heartwarming. We couldn’t be more thankful to all of our many donors, community members and our local partners who have all helped us reach this milestone today.”

This is not the only piece of good news about the Lincoln City Cultural Plaza Project. In April, the design and engineering work reached a new and exciting phase: 100 percent construction drawings.

Thanks to leadership by Rep. David Gomberg, the project has been authorized to receive $1.5 million in state lottery funds. These reimbursement funds, generated by the sale of Oregon Lottery bonds, could be available as early as Spring 2021. In addition to the $250,000 in private donations, the Plaza project has received grants from the Oregon Community Foundation ($50,000), the Siletz Tribal Charitable Contribution Fund ($25,000) and the Oneatta Fund ($25,000).

In the next six months, the LCCC Board and staff will be working toward co-operative projects with several local partners. These entities include Pacific Power, Lincoln City Rotary Club, Kiwanis Club of Lincoln City, the city’s Public Art Committee and the Lincoln City Farmers & Crafters Market. This summer, funded with a grant from the Oregon Cultural Trust, Shapiro Didway will be leading community workshops on artistic elements and themes, which will be ready for implementation when the project begins.

“In the year since we launched the Invest in Inspiration Capital Campaign, so much has happened. I don’t think it’s an exaggeration to say it’s been a real roller coaster,” said executive director Niki Price. “From the thrill of the $1.5 million state pledge to the social isolation of the pandemic, we’ve seen it all. What has been most amazing of all has been the constant support from our donors: check by check, brick by brick, we’ve been filling up that thermometer. Our heartfelt thanks to the community, for your continued faith in this great idea.”

TRACE-COVID-19, the groundbreaking Oregon State University project to determine community prevalence of the novel coronavirus, is expanding to…