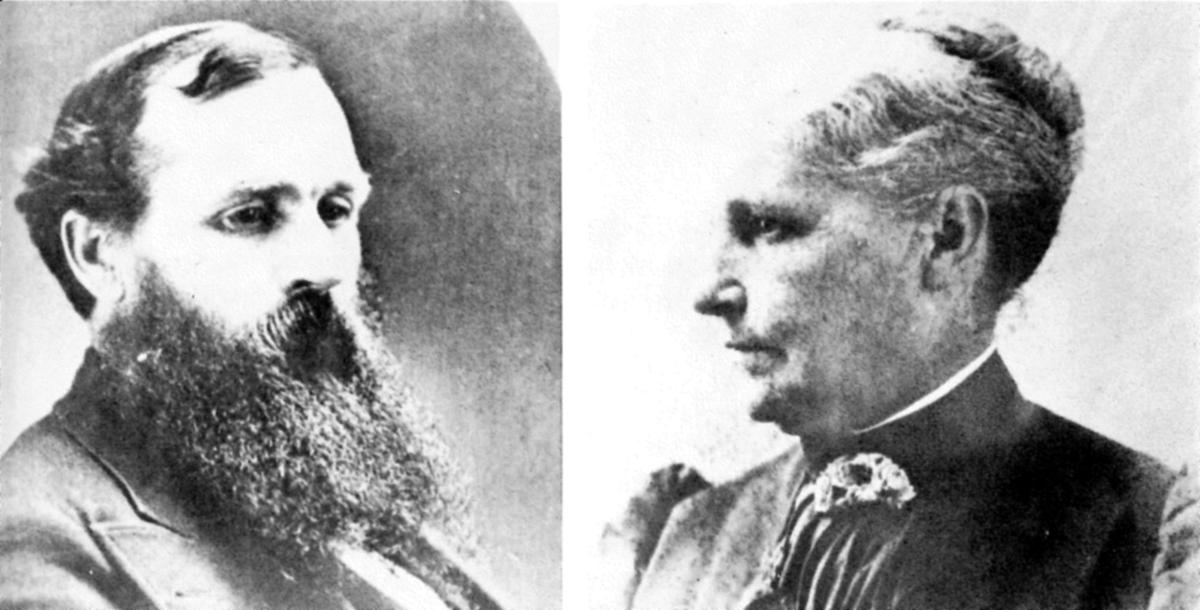 Drs. Gideon and Adeline Weed as they appeared later in their lives, circa 1890. 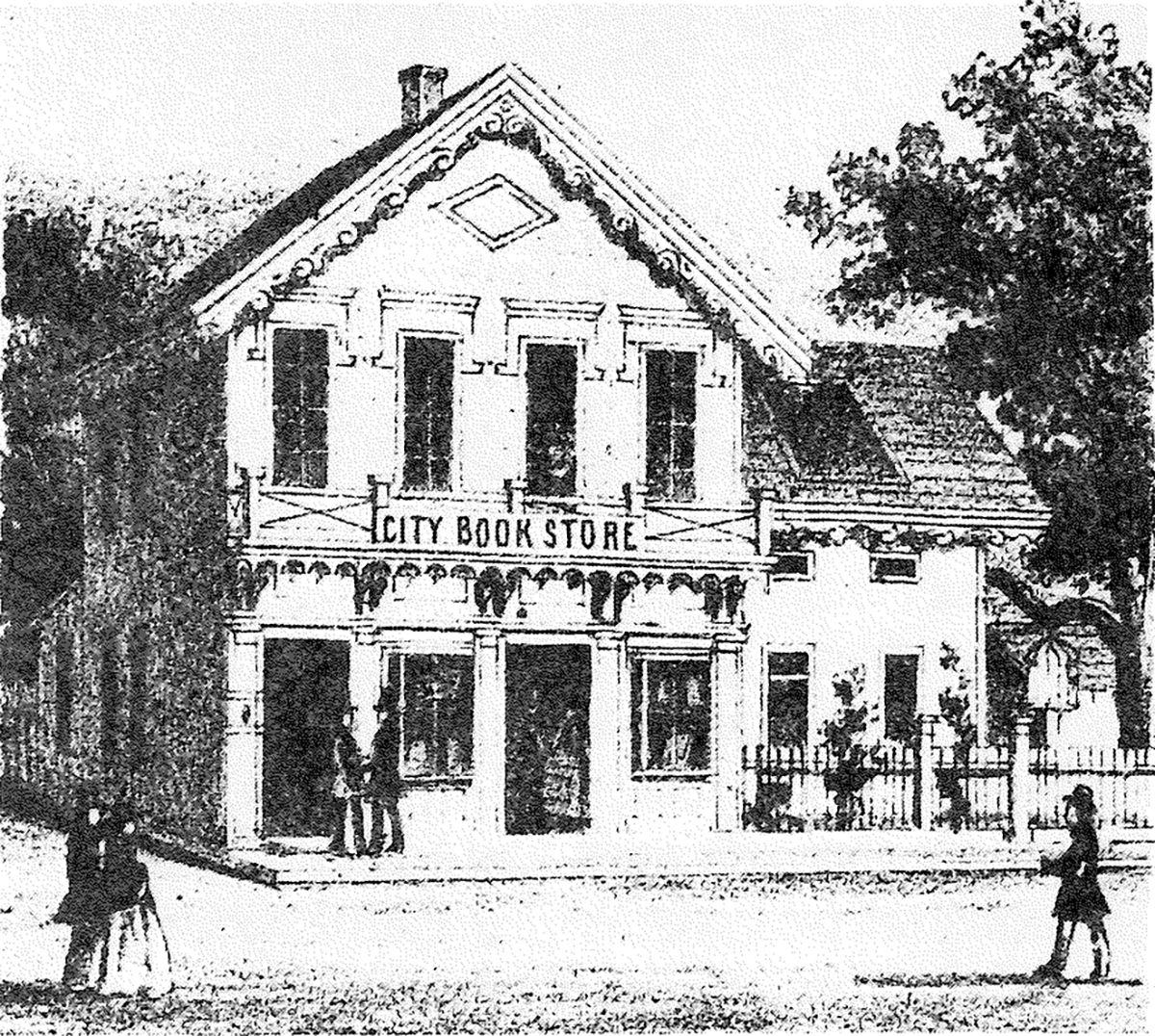 When they first arrived in Salem, Drs. Adeline and Gideon Weed rented an office on the second floor of this book shop, in 1858.

On any list of Oregon “firsts,” there’s one name that almost never pops up: Dr. Adaline M. Weed.

Which is understandable, because although Dr. Weed was the first female physician in the Oregon Territory, she was not a “regular” doctor – she was a hydropathist, a practitioner of “water cure”; and although she was Oregon’s first female public intellectual on the lecture circuit advocating for women’s issues, she didn’t start seriously talking about women’s suffrage until much later.

Also, in reviewing the exchanges of letters-to-the-editor she had with newspaper editors, it’s clear that she was a little too smart and articulate for her own good. Editors would, with a paternalistic and self-indulgent chuckle that one can almost hear while reading their words, poke a little fun at “madame the doctress”; she would reply in a letter rebutting every point with perfect professionalism but absolute mercilessness; and, shocked and stung at being called out for intellectual dishonesty by someone he never dreamed would be smart enough to recognize it, the editor would write something truly nasty before slamming the door shut on any further correspondence. This happened at least twice, in different Northwest communities: once in Salem, and again several decades later in the Seattle Post-Intelligencer. It probably happened in other places, too, because newspaper coverage of the Weeds was always thin and sparse.

It's hard to be remembered when one is shut out of the “rough draft of history” for being too smart to cross swords with.

Ada Weed and her husband, Gideon, were both hydropathic physicians — graduates of Dr. Russell Trall’s Hygeio-Therapeutic College in New York City. Trall’s institute had, at that time, just started up. It taught a blend of hydropathy and hygienic medicine not too dissimilar from the preferred lifestyle of Seventh-Day Adventists today: whole unmixed foods, processed as minimally as possible; fresh, smoke-free air; absolutely no alcohol or tobacco; loose-fitting clothing; regular exercise; and proper rest.

Like other “alt-medicine” trends in the 1800s, Trall’s school was a bitter foe of what he called “allopathic medicine” — the practice of attacking disease by giving patients drugs. This, of course, was the school that eventually won; but that happened primarily because of the drugs that became available after 1880 or so, which quickly made allopathy the most effective approach. But in 1856, when the Weeds graduated from Trall’s school, that was hardly the case. Almost everyone knew someone who’d gone to a traditional doctor and died after a week or two of enduring copious bleeding, blistering chest poultices, “heroic” purgatives, and other unpleasant therapies.

(By the way, “Allopath” is a loaded term today — when it’s used, it’s usually intended as an insult, like “quack doctor” — but for convenience, I’m going to use it in this article to refer to pre-Germ-Theory mainstream physicians.)

Water-cure doctors like Ada and Gideon did as well as or better than the allopaths. The allopaths, who were much more numerous, had noticed this, and it sharpened their antipathy.

Upon graduation, Ada and Gideon set out for San Francisco to set up their practice there. When they got there, though, they found an established practitioner whose business they didn’t want to horn in on; so they headed north to Oregon.

When they arrived, the two of them settled into Salem — then Oregon’s second-largest city — and hung out their shingle. That was in 1858.

They also immediately started giving public lectures, and it was in the course of those that Ada ended up in her first fight with a newspaper editor: the redoubtable Asahel Bush, editor of the Salem Statesman and leader of the “Salem Clique” of Democrats.

Bush attended one of Ada’s first lectures, and covered it in a breezy, lazy editorial headlined “A Woman’s Sphere.” It basically pats Ada on the pretty little head, complimenting her on her “generally correct intonation” and “tolerable manner,” before remarking that “the whole lecture was leavened with ‘women’s rights’ and other modern ‘reform’ humbugs” and going on to opine that such things were fine so long as Woman was not led to think she could forsake the kitchen and nursery to contend with the “sterner sex” in the courthouse or on the quarterdeck.

It's worth looking the whole passage up (there’s not room to reproduce it here, but you can find it in the Nov. 23, 1858, issue.) That’s especially true for old newspaper editors, who will immediately recognize it as the kind of fluffy, unimportant fill one bangs out on deadline when there’s a hole in the paper and nothing to plug it with. Old newspaper editors will also know, from bitter experience, that those are the most dangerous parts of the paper, because the attack, when it comes, is completely unexpected and usually rock-solid. One doesn’t usually make a bad mistake when one’s full attention is being paid to the job at hand; it’s the casual nobody-could-possibly-object-to-this puff piece that, dashed off halfheartedly and quickly forgotten about, will contain the poison pill of error that will ruin your day.

This appears to have been exactly what happened here. Bush found himself completely “pwned,” as modern gamers say, in the pages of his own newspaper. Ada pointed out that “women’s rights” had not been part of her talk at all, and that the cherry-picked example he’d cited had been an obvious sarcastic remark that he had chosen to pretend she had meant seriously.

Bush’s response was positively petulant. Accusing her of trying to gin up a newspaper controversy for publicity, he addressed a couple of her points very unconvincingly and then, declaring he had no interest in wasting any more time debating with such an obvious simpleton, declared that no further correspondence from her would be printed.

It was a bad mistake, really, for both of them. Bush, who would grow into his job and become one of the best journalists in Oregon history, surely didn’t come out of this smelling like a rose (although it’s hard to say, since he cut off the topic so curtly in his letters-to-the-editor section). And for the Weeds, who had in Salem’s allopaths and homeopaths a pre-existing and well-connected army of enemies, Bush was maybe the one person in town they could least afford to antagonize.

But the bigger problem was, as hydropathy practitioners, the Weeds needed a fairly expensive facility — they basically needed what we’d recognize today as a luxury spa, with hot tub, cold pool, showers, and steam room, in addition to residential rooms for long-term patients. They just never managed to connect with an investor who saw enough value to justify the outlay; and their own attempts to raise the money on the lecture circuit weren’t panning out — their free lectures were well attended, but the paid ones weren’t. The pointed silence from the city’s newspaper made it hard to get the word out about what they were doing, and their well-connected professional enemies kept the local “coconut telegraph” buzzing with rumors that they were killing patients and going bankrupt.

It was all too much, and in 1860 the couple pulled up stakes and left Salem, embarking on a long lecture tour that ended with them opening their practice in Sacramento.

In Sacramento, things went OK; they went better when the couple followed one of the gold rushes into Nevada. But they never really “arrived” until 1869, when Gideon went back to medical school and earned an allopathic degree, and, armed with that, the two of them traveled to Seattle to set up shop.

There, they billed themselves as basically a “Dr. and Mrs.” couple. The combination of the two medical proficiencies made Gideon a powerful package, and gave Ada cover to give hygienic-medicine advice and lectures without making powerful enemies. They quickly rose in social prominence, and Gideon ended up serving two terms as mayor of Seattle.

Ada’s advocacy of temperance, of course, made her a cornerstone of the local Women’s Christian Temperance Union. On women’s suffrage she didn’t have much to say until after other activists persuaded the Washington Territory’s legislature to extend the vote to women in 1883, when she suddenly realized that women, once enfranchised, voted overwhelmingly for prohibition. So when the territorial Supreme Court struck the law down in 1887, she rallied with other progressive women to oppose the decision. But she was always a prohibitionist first, and a suffragist second.

Eventually the couple moved back to Sacramento, where Gideon practiced medicine until he suffered a paralytic stroke in the early nineteen-oughts; Ada cared for him and kept busy doing things for the community and working for Prohibition.

And the two of them at last enjoyed the full respect and admiration of their community. “She has always been foremost in religious, philanthropic, and moral reform work,” wrote Frederick James Grant in his 1891 book, History of Seattle, Washington. “She is a lady of culture and possesses literary taste and ability of a high order."

She died of cancer in 1910, an esteemed and respected member of society. And it’s entirely possible that her smooth re-integration into the upper echelons of West Coast society is why, today, when asked who the Oregon Territory’s first female physician was, most people who think they know the answer (including, until just last week, me!) will say, “Bethenia Owens-Adair, in 1874” — and be wrong.

Expect stormy conditions as holiday travels get under way

Travelers throughout Oregon should be prepared for winter driving conditions this holiday season especially with wind and heavy rains forecast.