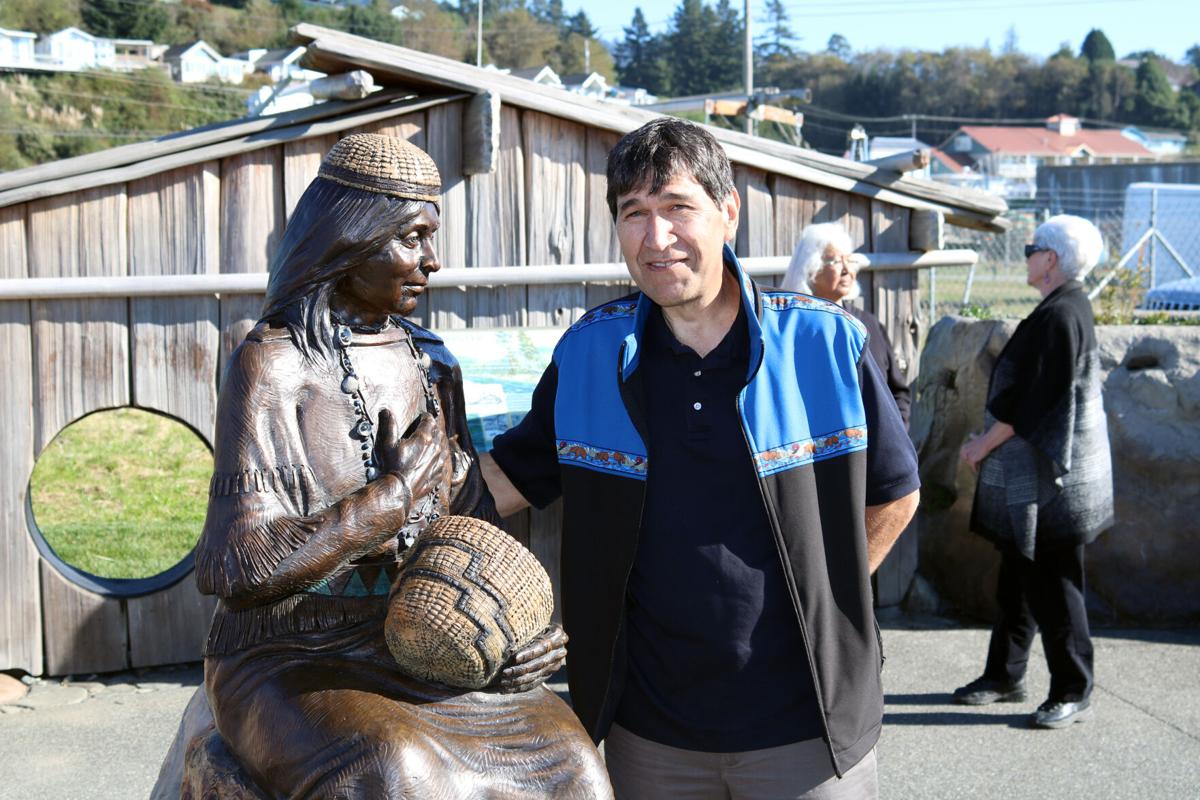 Milo Mann stands next to the newly installed statue of Lucy Dick. He is a Chetco/Tututni descendant and serves as vice president for the Chetco Indian Memorial Project. Photo by Linda Pinkham. 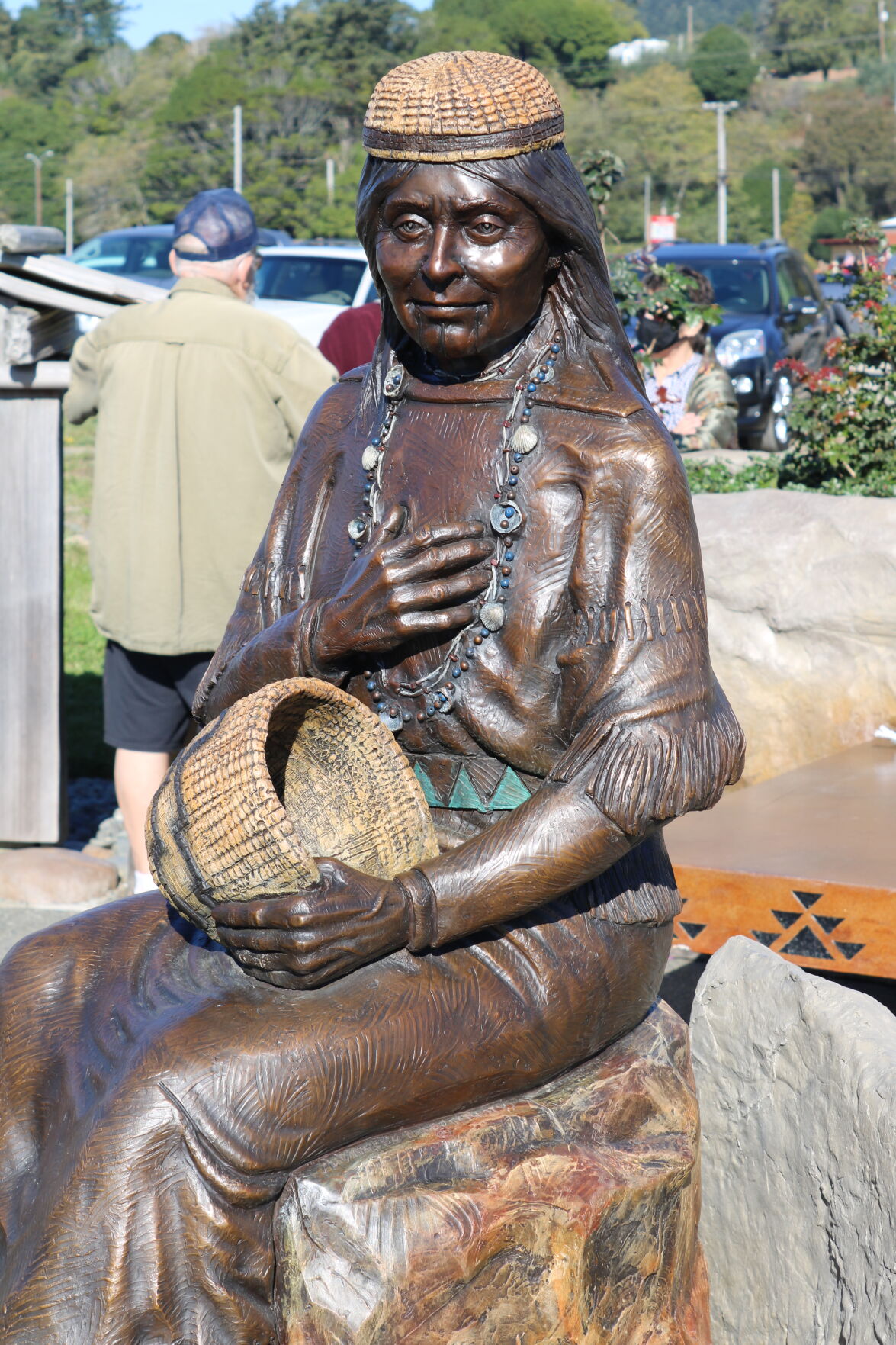 The bronze sculpture of Chetco elder Lucy Dick has incredible detail, from the tattoos on her chin to the shell and bead necklace, to the pattern on the basket she holds. Photo by Linda Pinkham. 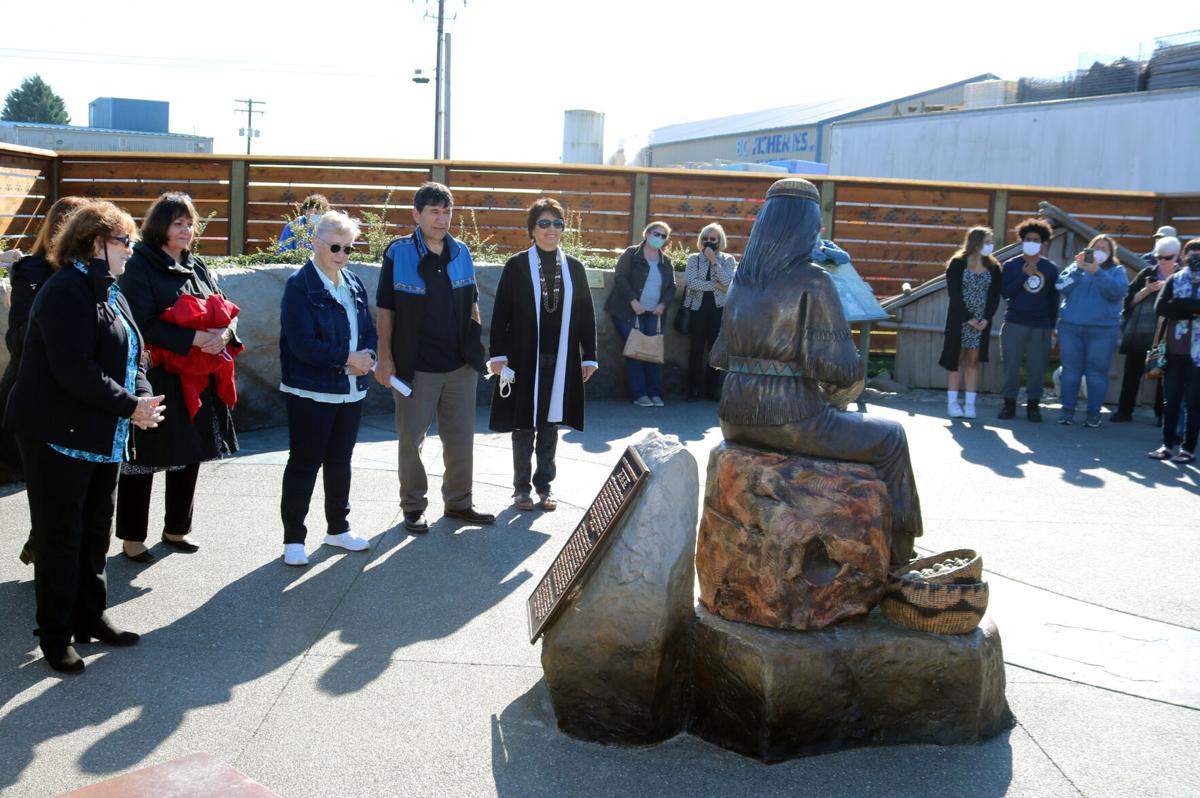 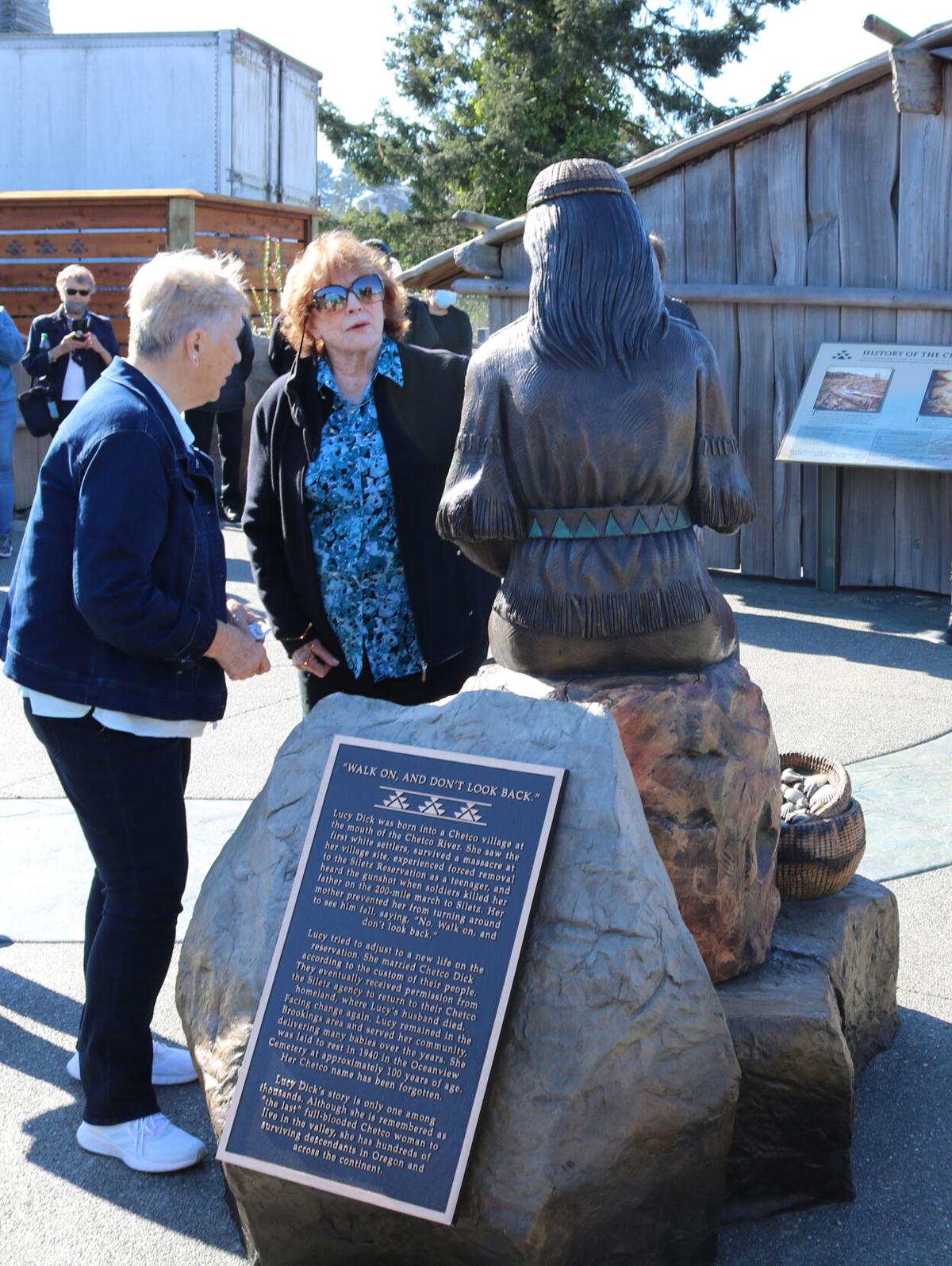 Artist A. Vincen Talbot describes some of the details in her monumental sculpture of Lucy Dick with board secretary/treasurer Karen Crump. Photo by Linda Pinkham.

The unveiling of a bronze sculpture of Chetco Native American Lucy Dick at the Port of Brookings Harbor drew a small crowd of funders, fundraisers, volunteers, Native American elders and descendants of the famous Chetco elder who passed in 1940.

The cast bronze sculpture in her likeness was the final touch to complete the interpretive site. Previous stages of the project included building a plank house, installing interpretive signage, and planting native vegetation.

“The Chetco Indian Memorial is the only interpretive site that represents an Oregon coastal tribe and its history on the very site of their ancestral village, making this project unique in the region,” said Milo Mann, a descendent of Lucy Dick and a member of the Chetco tribe. The memorial is tucked away at the end of the Port of Brookings-Harbor boardwalk. The almost half-acre portion of land where the memorial is built was donated by the Port of Brookings Harbor.

“We’re so proud of this project,” said Adrienne Crookes, president of the board of directors for the memorial. “I’m so happy that we’re done. This has been 11 years and it just turned out so beautiful.” The Chetco Historical Memorial Project was started in 2009 because of the “near-absence of history in the Brookings-Harbor area about the Chetco native people, the earliest known inhabitants of the Chetco River Valley,” according to the project’s website.

“I am so proud and happy to be here today to attend this event and the opening ceremonies, said Delores Pigsley, Tribal Chairman for the Confederated Tribes of Siletz. Other tribal council members attending were Lily Butler, Angela Ramirez, Reggie Butler.

“It’s such a great pleasure to see this memorial completed,” Pigsley said. “We were here when there was nothing; we were here when there were a few rocks; and to be here today to see all the work done.” She thanked board president Adrienne Crookes, and honored past-president Lynda Timeus, who passed in 2018, but worked tirelessly on the project. “We welcome all of you who took the time to come down and see the memorial,” she said.

“Lynda Timeus was a Siletz tribal elder, educator and lifelong Brookings resident,” Mann said. “It broke our hearts to lose her before she could see this project finished.” Timeus’s husband, Harvey Timeus worked alongside her to help her achieve her dream and continued to work on the project to completion after her passing, Mann noted.

Lucy Dick was the last known full-blooded Chetco Indian to live in the area. In 1856, all surviving members of the tribe, including Dick, were forced to move to the Siletz reservation near Newport after the Oregon Indian Wars in the mid-1850s. Dick was born sometime between 1841 and 1847. Dick returned to the Chetco area in 1870 and lived out her days here.

The sculptor for the Lucy Dick bronze is A. Vincen “Rusty” Talbot, a renowned artist and sculptor from Florence, OR.

“Rusty’s work and attention to detail is incredible,” said Mann. Talbot is best known for her sculptures of Sacajawea, such as those found at the Sacajawea Center in Salmon, Idaho and the Sacajawea monument in Boise.

“Lucy is my seventh monument of Native Americans,” Talbot said. “They contacted me 11 years ago. Evidently they saw my work on the website at the gallery, so they contacted me to see if I would be interested. Of course, I said ‘I’d love to.’”

She asked them to send her pictures. “So they sent me a picture of her, a little, tiny, frail person sitting on the grass and another of her sitting on a bench with her daughter. I enlarged the face and said, ‘okay, but when you have a sculpture like this, she looks sad and frail. You don’t want that. You want something younger, more gentle.’“

Talbot is primarily a portrait artist, so she did some drawings of her concept. “I loved doing the face. I just kind of lifted it up a little, made her just a little bit younger.” She came down and met a couple of the elders, descendants of Lucy, and they told her all about Lucy’s family. After submitting some drawings and receiving approval, Talbot created a maquette, a preliminary and miniature model of the sculpture, which was immediately approved.

The group raised money over the years to have the sculpture made. The bronze sculpture was finally cast at the foundry Talbot uses in Joseph, OR and then installed at the memorial last week.

Other artisans for the project include Larry Watson and Peggy O’Neal of WOW Arts and Exhibits of Bend who designed the memorial; Mike Woudstra of Woudstra Concrete Finishers who created the salmon-stamped concrete pad and Keith Schmitz of Full Spectrum Landscaping for the indigenous plant garden and landscape work.

Making your holiday to-do list? Check off one thing now: Get a flu shot

The flu vaccine can take up to two weeks to become effective, so no matter what you have planned for Thanksgiving this year, get your flu shot now.

What are your favorite Halloween traditions?

Tax Time: Property tax statements in the mail this week

Tax Time: Property tax statements in the mail this week