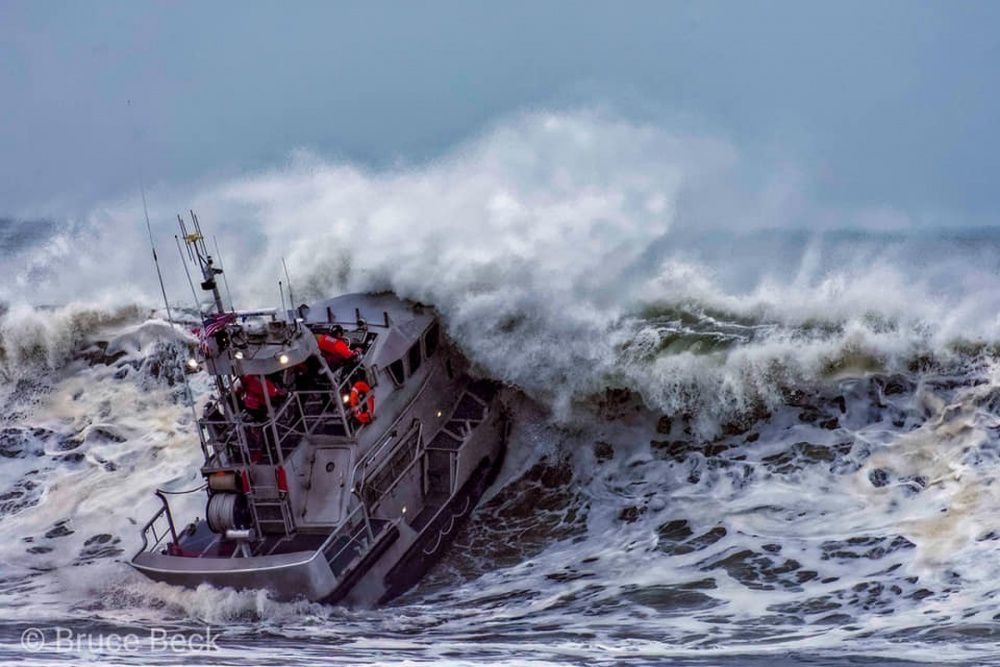 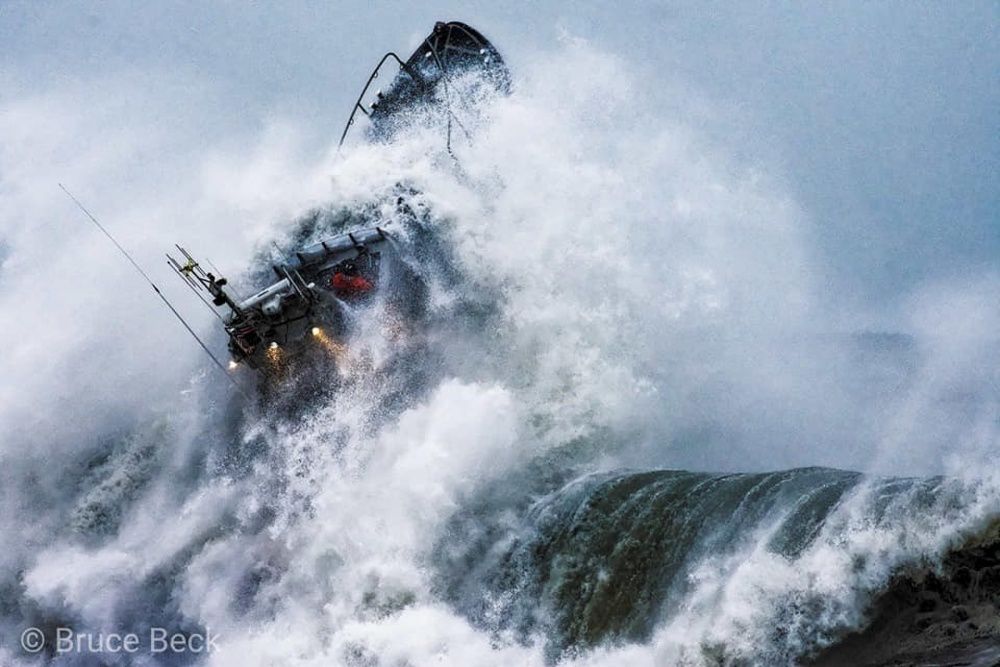 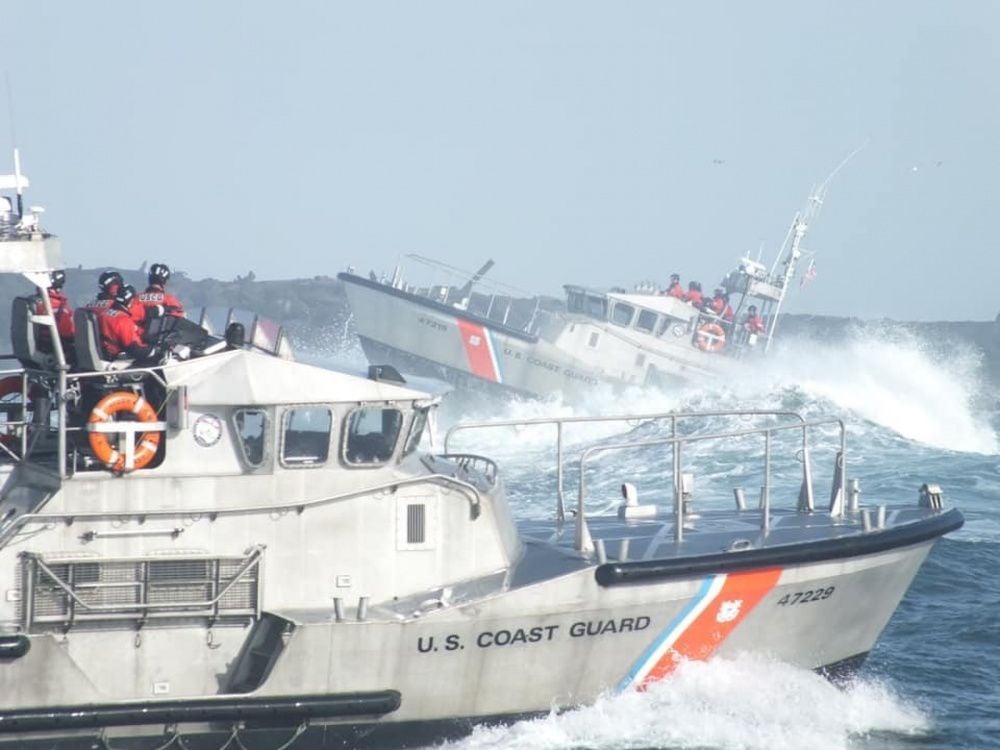 Petty Officer 2nd Class Enrique Lemos (surfman #559) operates a 47-foot Motor Lifeboat near the entrance to the Umpqua River in Winchester Bay, Oregon, Dec. 26, 2019. When Coast Guard crews are operating in the surf there has to be another asset nearby to respond if something goes wrong in the dangerous conditions. 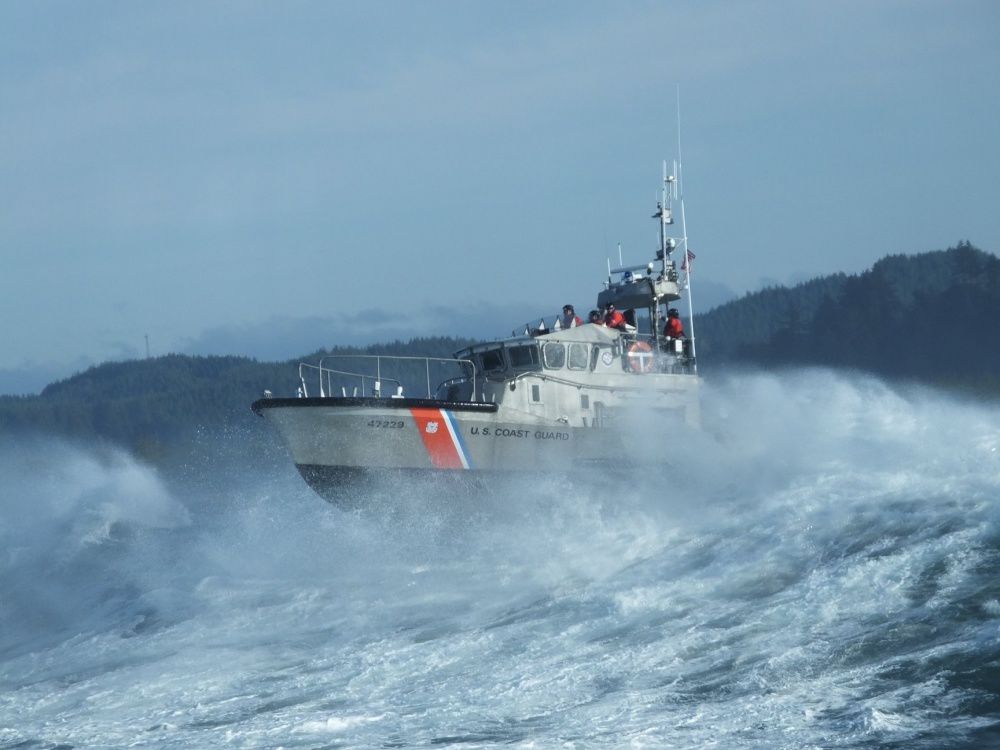 Petty Officer 2nd Class Enrique Lemos (surfman #559) operates a 47-foot Motor Lifeboat near the entrance to the Umpqua River in Winchester Bay, Oregon, Dec. 26, 2019. Lemos was one of 10 Coast Guardsmen to certify as a surfman during the winter and spring. 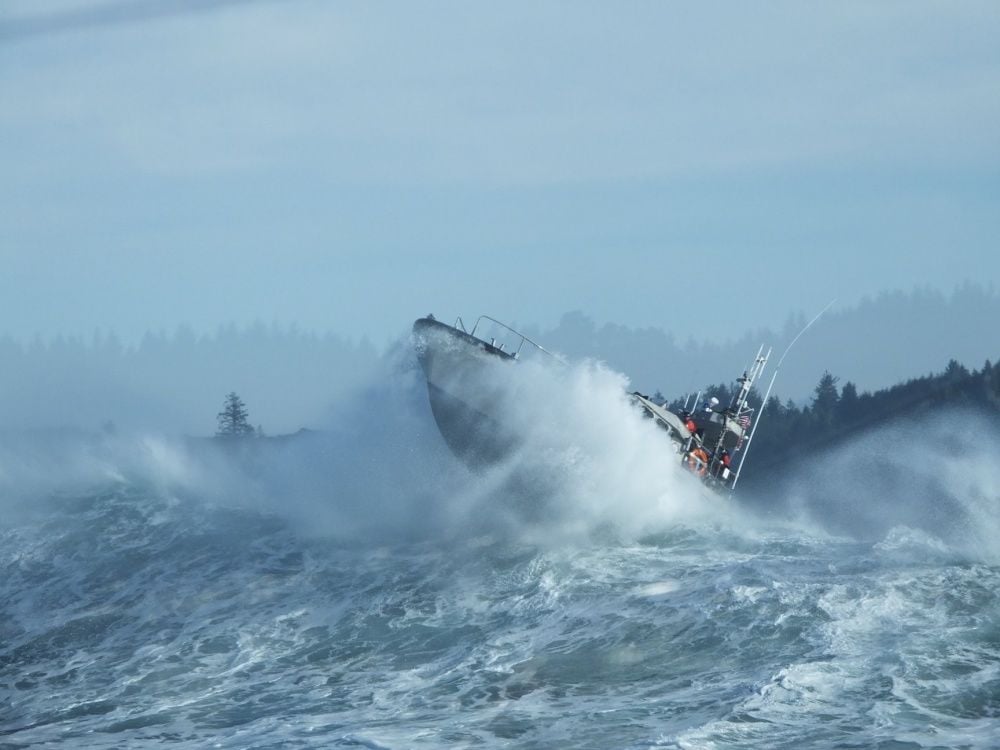 Petty Officer 2nd Class Enrique Lemos (surfman #559) operates a 47-foot Motor Lifeboat near the entrance to the Umpqua River in Winchester Bay, Oregon, Dec. 26, 2019. Lemos was one of 10 Coast Guardsmen to certify as a surfman during the winter and spring.

Years ago a visitor from Central Oregon stood on the Depoe Bay Bridge, which runs along the Pacific Coast Highway, otherwise known as State Highway 101. She looked out to see a silver boat zipping around in the ocean, and thought to herself ‘that looks fun and I want to drive that boat.'

“I had no prior knowledge of the Coast Guard, but at that time in my life I was looking for a purpose,” said Petty Officer 2nd Class Kelsi Dozier, (surfman #561) from Coast Guard Station Yaquina Bay in Newport, Oregon. “After that family vacation to Depoe Bay and a little video research on YouTube, I reached out to a Coast Guard recruiter.”

The Coast Guard has certified 10 surfmen during the past 8 months. In order to earn the surfman qualification a Coast Guard coxswain requires a lot of hours at the helm while operating in the surf. These weather and sea conditions are most often found between the months of October and April.

“It requires a lot of extra time outside of normal duty hours,” said Petty Officer 1st Class Adam Preiser (surfman # 535), Station Chetco River in Brookings, Oregon. “I had to break-in at two different units and came in on baby leave to scout conditions and push for training opportunities. Surfman training conditions hold a very tight window and you have to get out there when the window is open.”

Preiser’s baby leave wasn’t any normal baby leave either, because his newborn needed to get life-saving heart surgery. Station Chetco River is a 7-hour drive from where the heart surgery was taking place at Oregon Health and Science University in Portland, Oregon. While visiting with his wife and newborn, he saw a weather system forming and knew it would bring the surf needed to train, and so he raced home.

Resiliency is a key factor for both member, family member, and mentor. Coast Guard service members need spouses and support systems to be strong and in place, so when they are on duty, their whole body and mind are on the job.

“Mentors put in a ton of hours to push you toward the qualification,” said Petty Officer 2nd Class Enrique Lemos, (surfman #559), Station Umpqua River. “They put in the same time as me.”

“The most important thing I learned from my mentor was to continue to learn and develop,” said Petty Officer 2nd Class Aaron Hadden, (surfman #560), Station Umpqua River. “Making surfman is not the end result. I have to continue to act like I haven’t made it yet.”

Mentors share mistakes and successes. They offer learning experiences and offer a 360-degree perspective. There is an awful lot of tough love as coxswains work toward the surfman qualification, but that ends up creating a very close bond.

A member’s resiliency is needed most when stick time is at a premium.

“It’s really hard to share stick time,” said Preiser. “It’s like a double-edged sword. On one side it’s healthy competition, and on the other, you want to be greedy because weather changes and boat casualties occur, and you don’t want to miss out.”

The healthy competition spoken of by Preiser was especially present while Hadden and Lemos were trying to qualify at the same time. They ended up earning the qualification on the same day and receiving their pin on the same day. Petty Officer 1st Class Raymond Aguilar (surfman # 557) and Dozier also had to share stick time at Station Yaquina Bay.

“You share a different bond with somebody who is operating at the same level as you are,” said Aguilar.

“Time is divided up fairly in my opinion,” said Hadden. “It’s a friendly competition. You just have to be always there pursuing sign-offs and asking to go out.”

This brotherhood turns into a community composed of past, current, and future surfman and they all live by a creed:

I will, to the best of my ability, pursue each

mission with the commitment, compassion,

and courage inherent in the title of Surfman.

I will endeavor to reinforce the worldwide reputation

of our forefathers in the Lifeboat Community.

I will maintain a guardian's eye on my crew at

all times, and keep a cool, yet deliberate, hand on the throttle.

I will give of myself, and my knowledge as those

who gave to me; so as the line of Coast Guard Surfman will live forever.

I will ensure that my supervisors rest easy with the knowledge that I am at the helm,

no matter what the conditions.

I will never unnecessarily jeopardize myself, my boat, or my crew;

But will do so freely to rescue those in peril.

I will strive with dedication and determination to bring credit

upon Coast Guard Surfman, past and future.

“Taking care of people and taking care of the crew are key factors in every successful mission,” said Lemos. “You have to invest in that philosophy.”

This is a once-in-a-lifetime process,” said Aguilar. “I will pay it forward on the positive side and will avoid paying it forward with the bad experiences.”

“I want to save people as well as their property,” said Dozier. “I also look forward to being able to pass the knowledge that I have gained to the next watchstander, crewman, and coxswain. Part of my job is to teach others the energy and movement of the waves and how to look at the weather. A surfman has to look at everything and recognize how it will come together and affect the mission.”

For Preiser, The ‘surfman community’ is strong and it goes outside of the Coast Guard. He has known a fellow surfman since he was 5 years old and another surfman was in his wedding.

“The brotherhood begins while training because regulations state we can’t go out in the surf without another boat out there,” said Preiser. “That boat and that crew is our lifeline if something goes wrong.”

Regardless of the different backgrounds, these five surfmen have all come together to protect mariners in the Pacific Northwest.

Preiser hails from The Outer Banks of North Carolina, the birthplace of the original Coast Guard surfmen, the Midgett family. But he didn’t realize or know the significance of his hometown before joining the Coast Guard.

“Research showed the challenge of becoming a master at boat driving skills,” said Aguilar. “But the original draw to the Coast Guard was the humanitarian efforts as first responders.”

Hadden began his military career in the Army, where he worked with explosives. He was deployed in Afghanistan for a year before joining the Coast Guard.

Lemos from central California, learned of the surfman career path at boot camp where his company commander, a surfman, told stories of his career at surf stations. His first unit was aboard the Coast Guard Cutter Pamlico, and then he attended Boatswain’s Mate A-school before arriving at Station Umpqua River.

Dozier’s journey began shortly after that trip to Depoe Bay. Her first unit out of boot camp was Station Chetco River in Brookings, Oregon. This was also her first up-close experience with the 47-foot Motor Lifeboat, the silver boat that she saw during her trip to Depoe Bay. She started her career in the engineering department before going to Boatswain’s Mate A-School. She then earned coxswain and heavy-weather coxswain qualification at Station Jonesport, Maine.

“As you begin to understand the surfman community, that is part of what keeps you in it,” said Dozier. “Most public knowledge of what surfman are comes from imagery of boats crashing through waves, but a surfman’s knowledge of history, areas of responsibility, ability to read the ocean, understanding the dynamics and know where the dangers come from, is what sets a turfman apart. It isn’t all about boat driving, there’s also the other side of it that is based around knowledge, experience, and understanding.”

Most cases don’t occur in the surf, but surfman and the crews of the motor lifeboats are the people who can get through any conditions to help the disabled mariners offshore, who would otherwise be drifting helplessly.

Last summer Dozier sat at the helm of a 47-foot MLB and watched the ocean swells approach the Depoe Bay entrance, known as the Hole in the Wall. As a now experienced boat operator, she intently watched the ocean to understand the dangers of entering this particular port. Although intently studying she remembers thinking, “This is pretty wild — a few years ago I was up on the bridge thinking they were nuts for trying to go in there. It looked too small and shallow.”

Dozier loves the history of the surfman and lifeboat community, which in turn heightens her appreciation toward the elite community she is now a member of.

“I enjoy hearing the history of the surfman that came before me like Master Chief McAdams,” said Dozier. “History shows why we are here and why we do what we do. One thing I have learned about being a surfman is it’s not one person or a number, it is a representation of the entire crew.”

Dozier may just be a self-proclaimed country girl, but with her inherent amount of compassion and drive to help others, she carries on the legacy of the creed as one of the Coast Guard’s newest surfman.

On May 16, Lincoln County Sheriff’s Deputies were dispatched to a disturbance outside a business in the 300 block of Hemlock Street in Waldport.