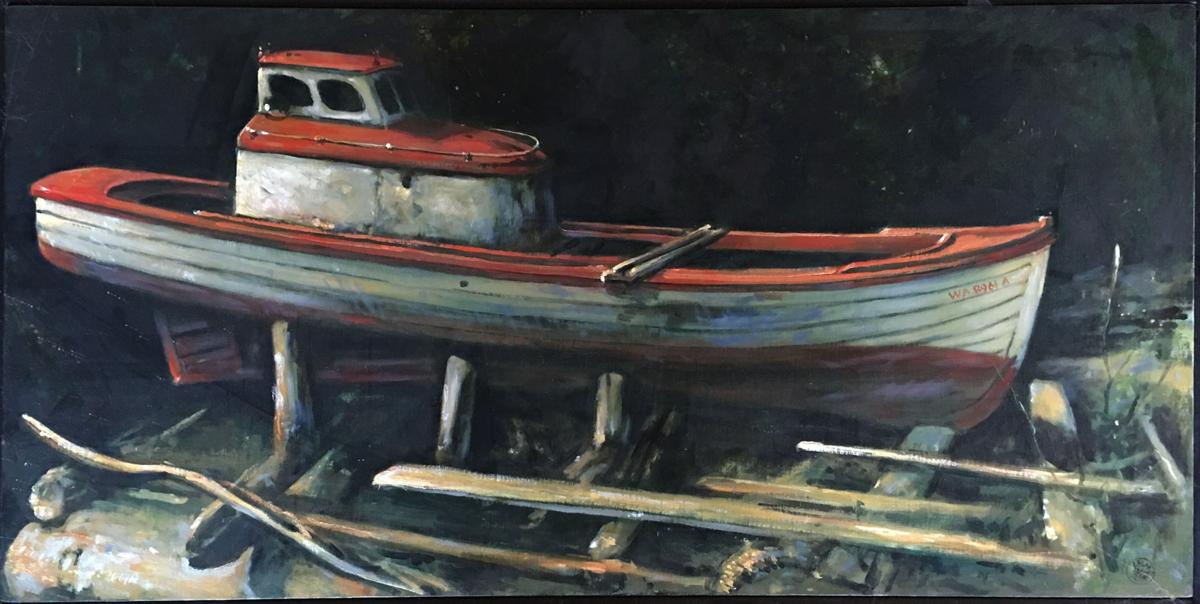 This painting shows an old “bowpicker” gillnetting boat on blocks by the river. 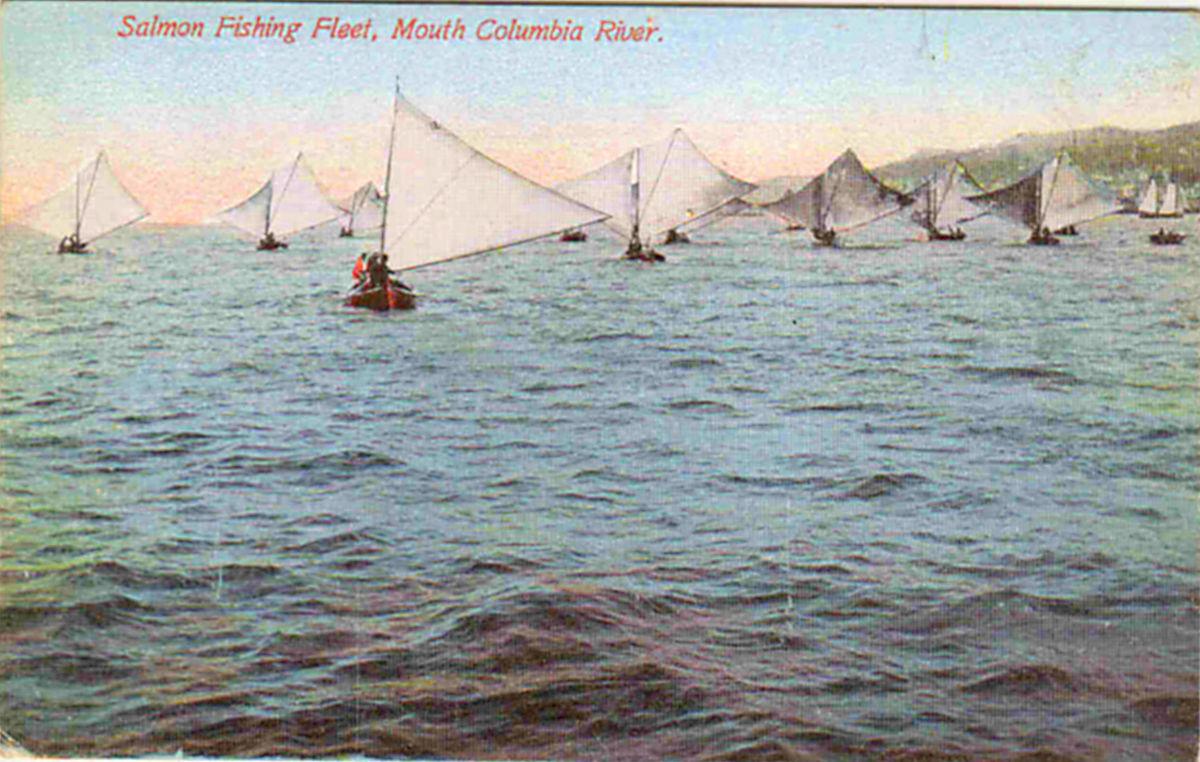 This postcard image shows the Astoria fishing fleet, around the turn of the century, in their old double-ender sail-powered boats. 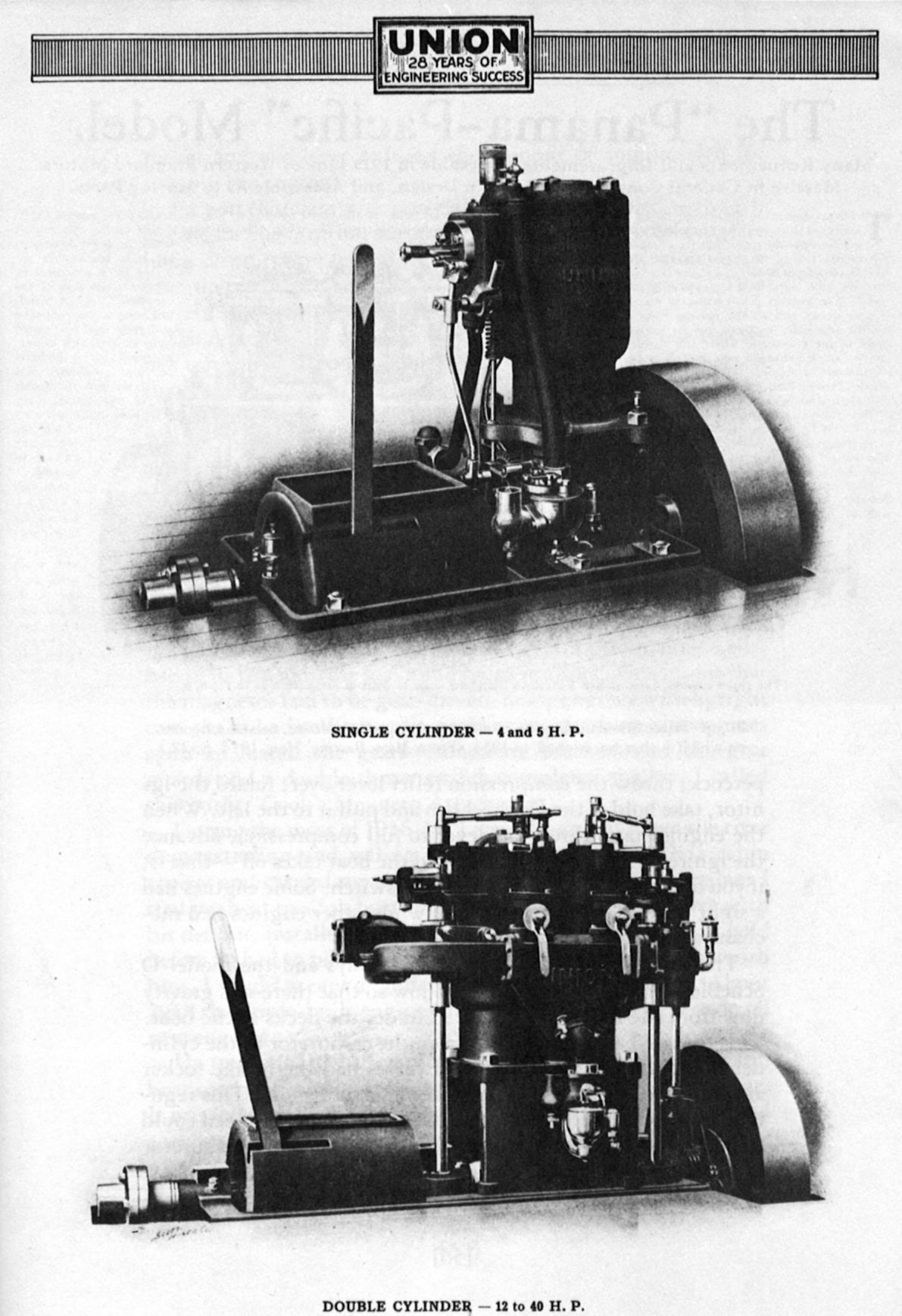 A page from the Union Gas Engine Co.’s 1913 catalog shows the company’s one- and two-cylinder offerings.

Between 1908 and 1911, something happened that almost certainly saved hundreds of men from drowning on the Columbia River Bar.

At the time, the mainstay of the Astoria gill-net fishing fleet was a picturesque double-ended lapstrake design, developed by a California man named J.J. Griffin in 1866 for use on the Sacramento River. They were 24 to 30 feet long, 7 to 8 feet wide, sloop-rigged with broad gaff-rigged sails on a relatively short mast. This design quickly caught on and became very famous and popular on river fisheries all up and down the West Coast.

Columbia River gill-net boats were designed to be at their very best when running “wing and wing” before the wind … and the lives of their crews — two men per boat — often depended on their being able to do just that.

The wind usually blew straight up the river from the sea. This was very convenient, because the way one fished with a gill-net rig was to get set up near the river mouth and drift seaward with the tide, nets out and filling with fish the whole time. Then, when the tide turned, it would naturally start pushing the whole works back up the river; when that happened, the fishermen would pull up their nets, ship their catch, and deploy the sails to get back to Astoria with the goods.

Of course, not all the gillnetting was done close to the bar. Some fishermen did just fine drifting with their nets far back from the river’s mouth. But that’s not where the best fishing was. The very best fishing was right at the mouth of the river, where the water runs shallow and fast and the nets can reach almost all the way to the bottom. The closer to the bar you got, the better the fishing became. So the fishermen had a strong incentive to deploy their nets as close to the bar as they safely could.

The trouble came when the fishermen misjudged, and cut it too close. The danger was that the fast-ebbing tide would sweep them out onto the bar, where massive and seemingly random 40-foot breakers waited to drop walls of green water on them.

When that happened, the fishermen would be warned by the feel of the fish caught in the net striking the bottom of the river. When that happened, they had from zero to three minutes in which to cut their nets loose, unship their oars, deploy those sails, and run upstream into the teeth of the seven-knot current with all the desperate haste they could muster.

All too often, it wasn’t enough, and they found themselves swept onto the bar and drowned.

Things were at their very worst in the spring of 1880, when especially high river levels extended the ebb tide and a pair of huge clear-sky windstorms caught boats out on the river with nets out. That year, one out of every 15 fishermen on the river drowned on the bar.

Things got better after the canneries started using small steamers to tow the fish boats out onto the river and bring them back again. But there was still that moment, when the crew of the farthest-out boat started feeling the fish strike the bottom, when the only thing that could save them — if anything could — was power and speed.

And that’s what the fish boats got, starting around 1908, when the owners started putting West Coast gasoline engines in them.

The engines that went into these old-school boats were slow, heavy, primitive, and built in one of several factories in San Francisco. In fact, until the mid-1930s San Francisco Bay was the Detroit of the marine-engine industry; the Union Gas Engine Company, est. 1885, was one of the very first manufacturers of gasoline engines of any kind in the U.S.

These engines were installed on the open floorboards of the boats, uncovered. There were one- and two-cylinder models, ranging from four to 40 horsepower. Like an old John Deere tractor, they used a heavy flywheel to carry the momentum from one “pop” to the next, and they ran at very slow speeds — 350 to 500 revolutions per minute. But they made vast amounts of torque, so they could be fitted with enormous propellers — 24 inches was typical — and moved a lot of water when they were running flat-out.

These old engines were much too primitive to have starter mechanisms or generators — or even magnetos. Each one came with a box of six ceramic jars and lids which the owner would fill with battery solution, and they provided the electricity for the engine’s ignition. To start one, a fisherman would open a little petcock on top of the engine and squirt in a little gasoline to prime it; then, he would pull a compression-let-off lever, retard the spark, grab the flywheel, and give it a leftward spin. Once the thing had fired two or three times, the fisherman would return the compression-let-off lever, advance the spark, throw out the clutch, and be on his way.

It sounds complicated, but in practice it’s really not.

Throughout the 1910s and 1920s — the high point of gillnet-fishing culture on the Columbia, before Grand Coulee Dam delivered its death-blow to the river’s salmon fishery — this was how it was done.

But when people talk about “gillnetter boats” today, they almost always mean a different kind of boat entirely — the one that replaced the old double-enders starting in the late 1920s. These were the square-backed models known as “Bowpickers.”

Bowpickers didn’t even give a nod to the old days of sail. They look somewhat like cabin cruisers, with a high-up steering station and a deckhouse covering the motor. And the best kind of motor for a bowpicker turned out not to be a big, heavy, slow-turning San Francisco dinosaur, but a smaller, lighter, fast-revving marine engine from one of the companies back east — like Continental or Gray Marine.

And so the crude old West Coast marine engine fell out of use, and the factories eventually closed, and most of the engines they made got recycled for scrap metal during the Second World War.

But every now and then you see one in a restored motor launch, or maybe in a marine museum — a reminder of the time when the West Coast was a marine-engine Mecca, and the Columbia River was swarming with salmon.

Among all the fun and noise of a New Year’s Eve celebration, it’s important to ensure that the festivities are safe and that there are people …

Oregonians can now play the lottery from home

Let turtles cross the road; nesting habitat is key to their survival

Oregonians can now play the lottery from home

Let turtles cross the road; nesting habitat is key to their survival

Four facts about Child Welfare during the COVID-19 pandemic