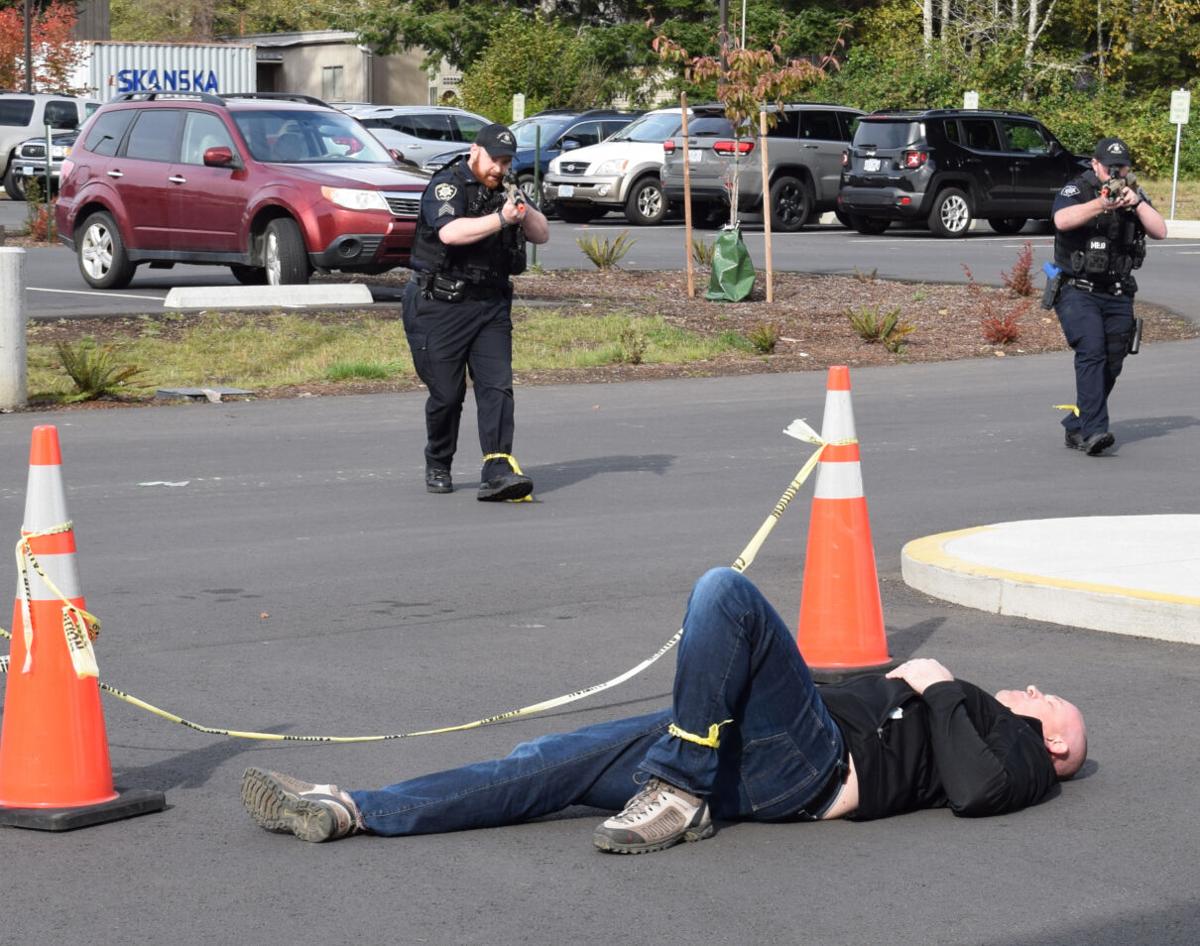 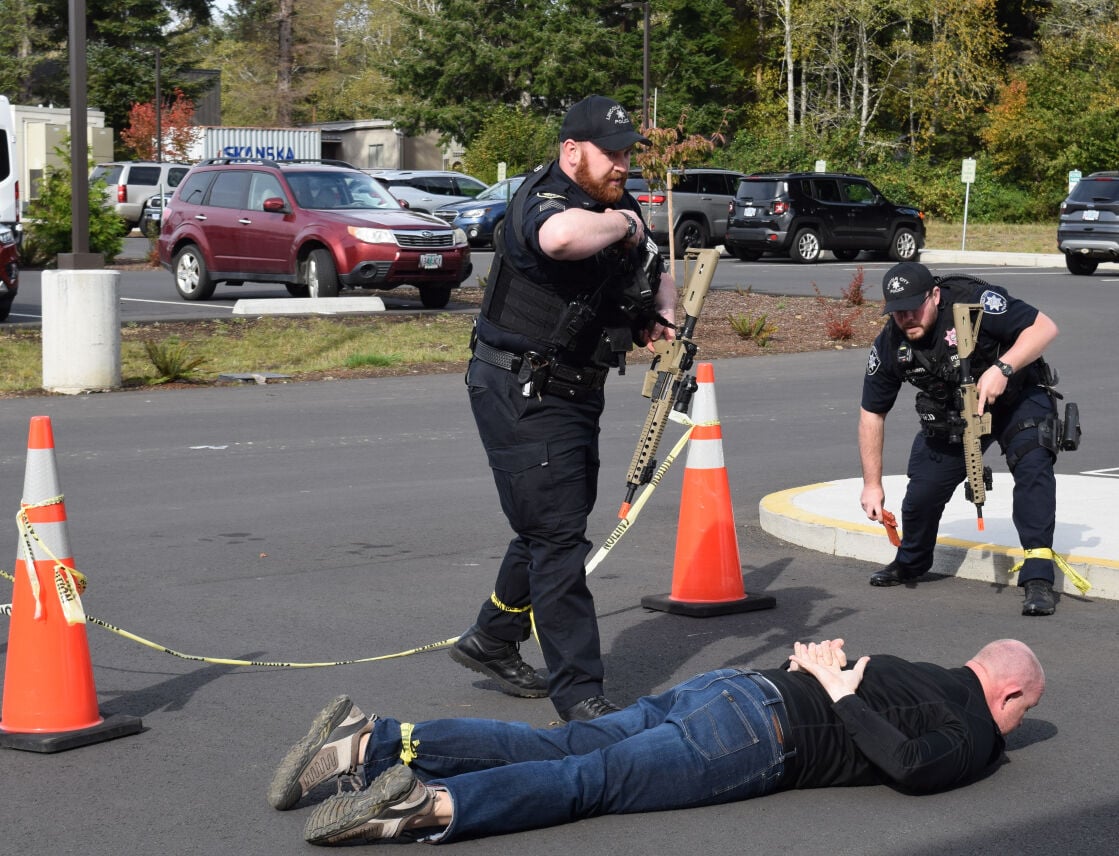 Police officers detain the hospital intruder during the drill.

Samaritan North Lincoln Hospital (SNLH) employees and administrators are assessing the results of an armed intruder drill conducted earlier this week at the medical facility on 28th Street.

Officers from the Lincoln City Police Department (LCPD) conducting the drill  said the realistic event is a valuable learning experience for involved staff, who were coached by observers on the appropriate responses to take.

Although hospital and clinic staff were notified in advance of the drill, they did not know the frightening details.

SHS Communications Strategist Mary Jo Kerlin said the scenario involved an angry man entering Samaritan Lincoln City Medical Center at about 11 a.m. demanding to see a doctor who no longer works there. The man storms through the back offices of the clinic waving a (fake) gun, screaming the doctor’s name.

As he exited the clinic, the man said he was going to the hospital to shoot the first doctor he finds. When he arrived at the hospital, an alert had already been sounded and all staff and visitors were well hidden from sight.

The man pounds on the glass at the emergency registration desk, paces up and down the public hallways waving his (fake) gun for a couple minutes, and then yells that he would shoot the first doctor he found in the parking lot. The angry man exits the hospital and began pacing out front while screaming obscenities and waving his (fake) gun.

During the drill, Lincoln City Police officers were dispatched after clinic staff called 9-1-1 and set off the panic alert. Following their approved police protocols, arriving officers confronted the arm man outside the building, ordering him to put down his weapon. The man does not comply and aims his (fake) gun at the officers, who then eliminates the threat with their weapons that, for this scenario, were also fake.

"Even though this was just a drill and the guns were fake, the angry man, portrayed by SNLH Medical/Surgical Nurse Bryan Sadler, was extremely convincing," according to a release from NLPD. "In fact, after the drill he returned to the clinic to formally introduce himself and apologize for frightening them."

The drill was organized by Mike Bowman, hospital emergency preparedness coordinator, and had LCPD personnel assisting in partnership to help make the drill as realistic as possible while keeping everyone’s safety the number one priority.

Bowman said the lessons learned from the successful drill will help to refine future protocols.

“Even though the staff knew it was a drill, there was still shock because the actor did a very good job in portraying himself as someone that is looking to kill somebody, so it was shocking for them to experience that,” Bowman said, adding that additional review with the hospital staff to review what steps they would take during such a violent intrusion would be beneficial.

Bowman said moving forward the hospital will likely set up small work groups to assess what training will be necessary.

“Just walking the staff through specific steps to prepare for another full scale like this,” he said.

Bowman said a critical part of the security planning moving forward will be closely working with law enforcement, such as Lincoln City Police, the Lincoln County Sheriff’s Office, Oregon State Police and North Lincoln Fire & Rescue to best prepare for any major emergency.

“It is important that everybody knows that we are working together to prepare ourselves as much as possible for any type of situation for a small rural hospital,” he said. “It doesn’t take much to overwhelm us, so we do drills for any emergency, not only for armed intruders, but we do drills for a mass causality incident, major accidents, to a surge of patients. Especially with COVID, it doesn’t take much to overwhelm the hospital. We are working to do everything we possibly can to provide the best service for our community in any emergency situation.”

Bowman has served as the SHS emergency coordinator for approximately a year and three months. He is a former police officer from Phoenix, Arz.