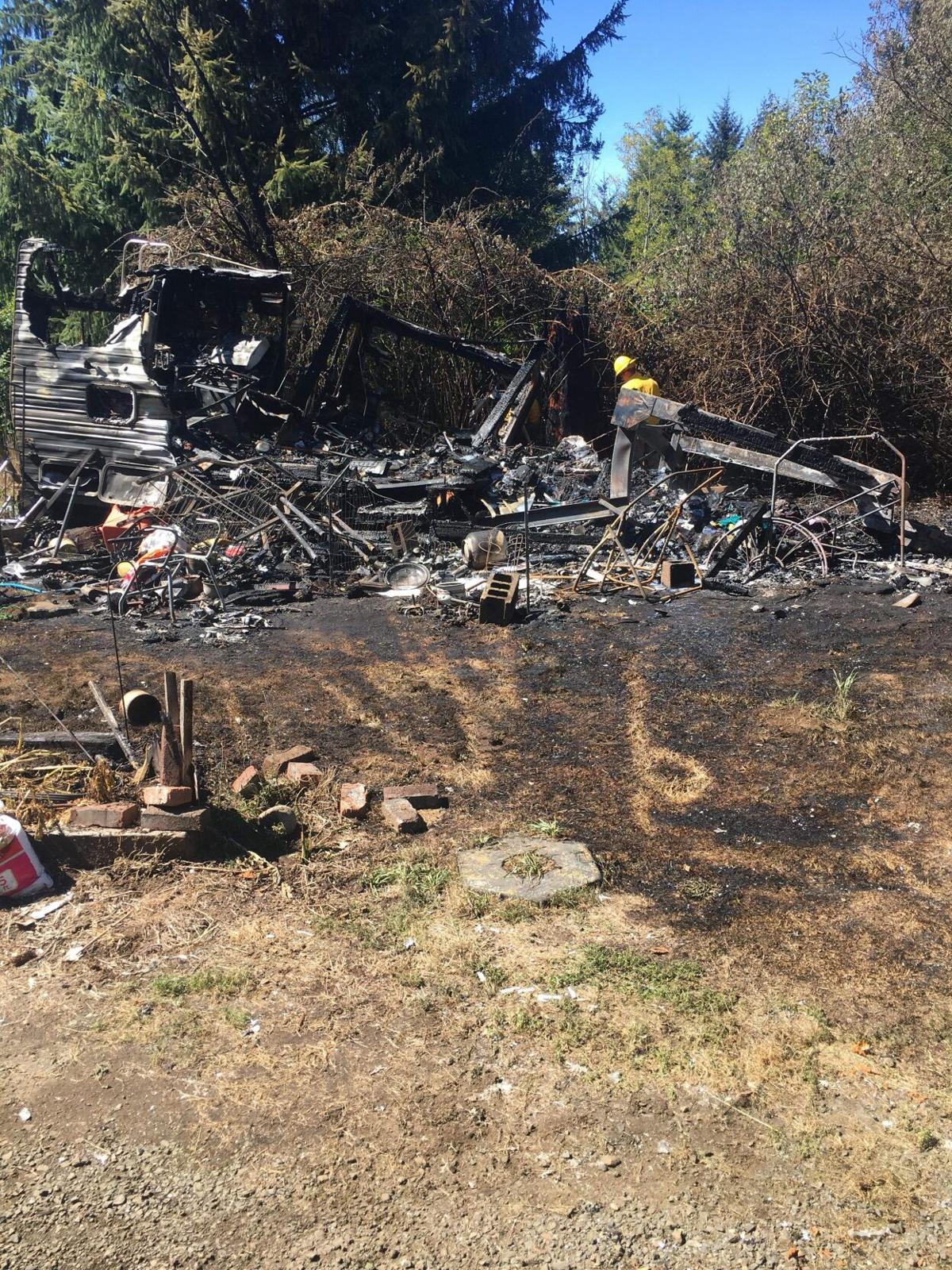 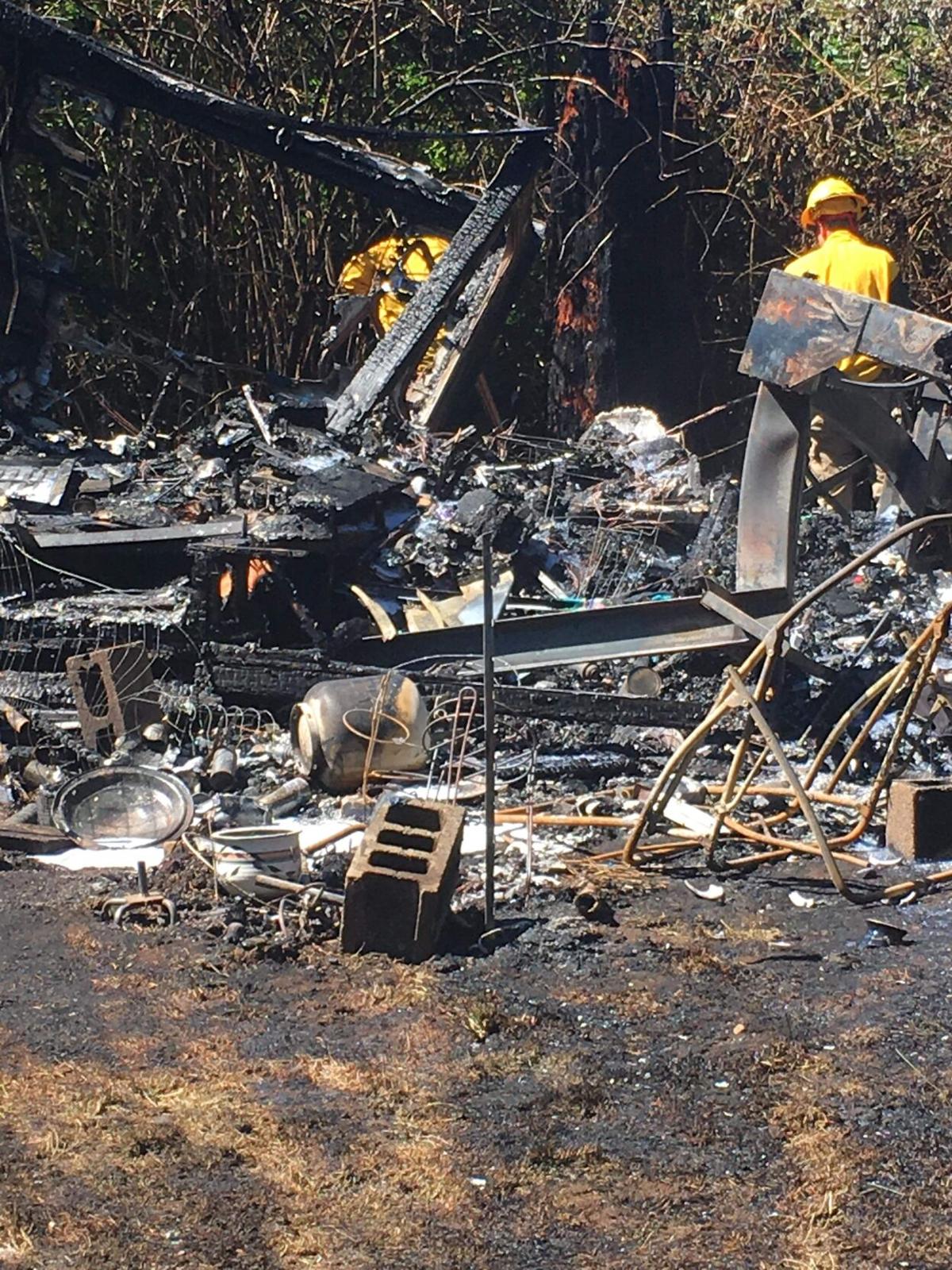 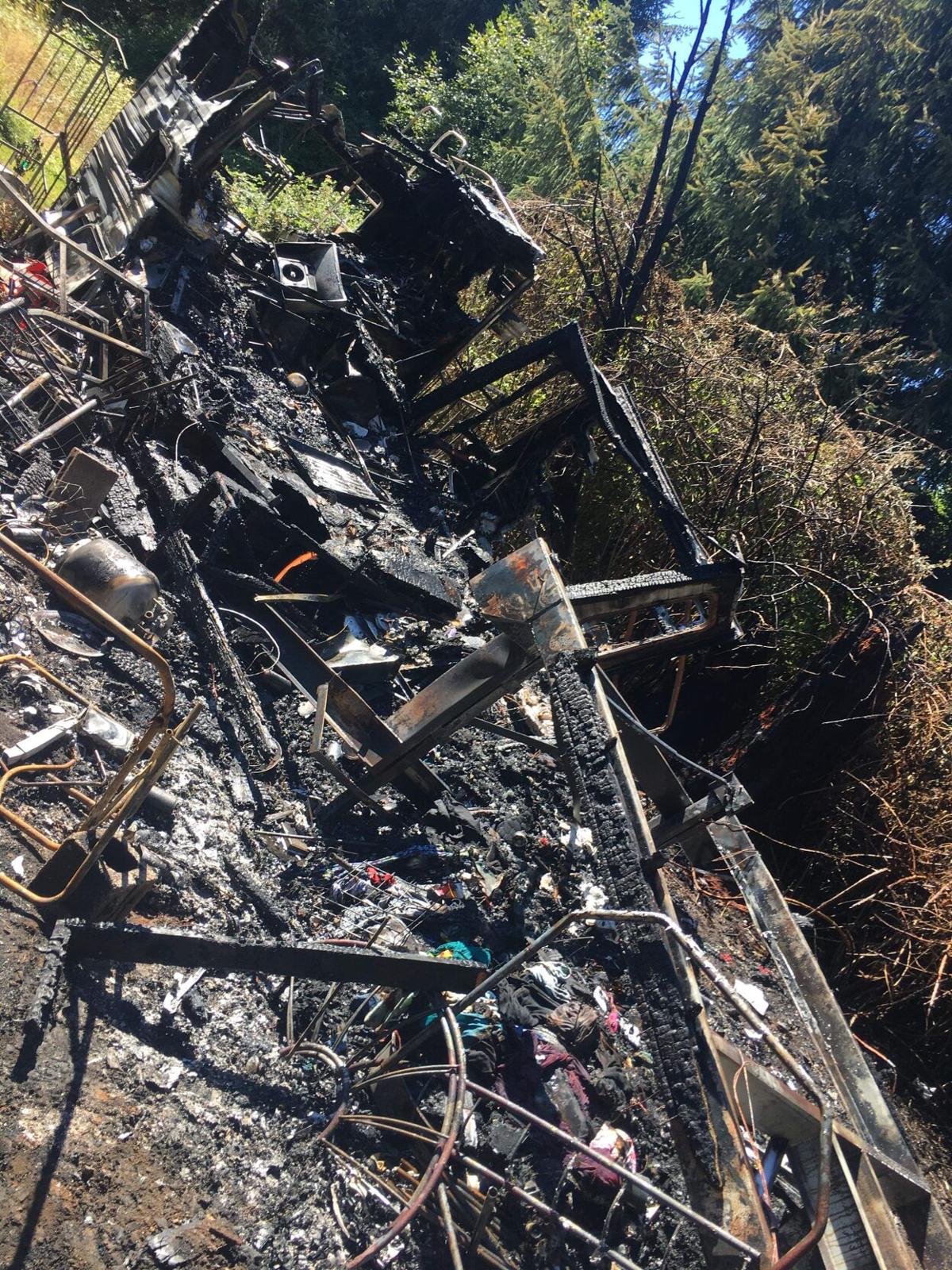 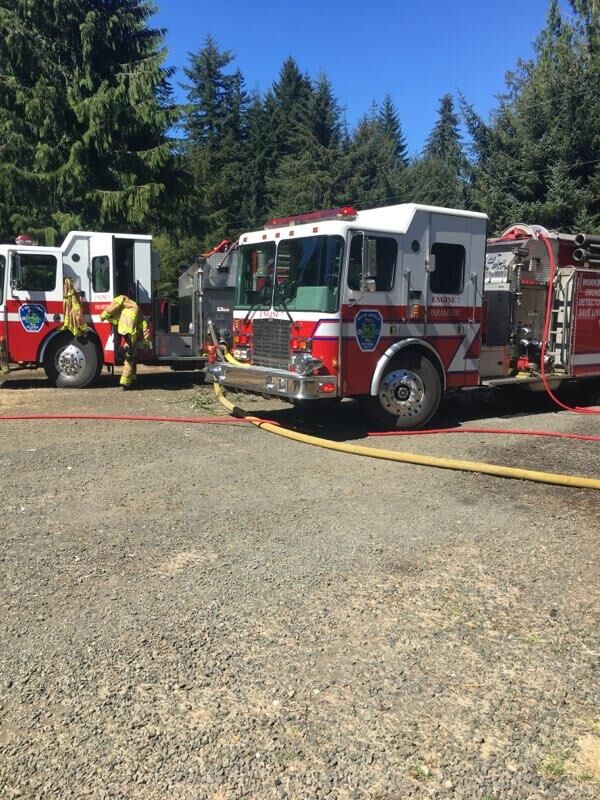 At approximately 11:53 a.m. on September 1, North Lincoln Fire and Rescue (NLFR) responded to a report of a vehicle fire on Deer Drive in Otis.

According to NLFR Chief Rob Dahlman, the victim reported she was sitting in her fifth wheel travel trailer when she heard a loud ‘pop’ noise and then noticed her electric fan had shut off. The trailer was powered by an extension cord that connected to a nearby shop and after suspecting an electrical shortage, the victim walked outside to inspect the electrical cord. At that point, Dahlman said she noticed there were flames coming out from underneath the trailer.

“She said she tried to use her hose to knock down the flames, but that wasn’t working, so she went back in the trailer, grabbed her dog and called 911,” Dahlman said.

NLFR responded shortly after the call, but at that point, the trailer had been completely engulfed in flames. It was a total loss and everything inside was also destroyed, according to NLFR. The flames also extended to some of the surrounding brush but was quickly knocked down by fire crews.

The Oregon Department of Forestry (ODF) responded to make sure there wasn’t any threat of a wildfire and the Red Cross responded to help the victim find a place to stay.

“Thankfully nobody was hurt and we were able to surround the flames quickly to prevent its spreading,” Dahlman said. “ODF responded because they have been very concerned with potential spread given the historically dry conditions we have right now.”

Dahlman referenced the current wildfire in western Lane County as an example of how quickly fire is spreading in these dry conditions. The 400-acre wildfire in private forestland about 1 mile southeast of Mapleton, Ore. has spread across land that is similar to the Otis/Rose Lodge region, Dahlman said.

Oregon will be facing extremely hot weather for the next few weeks, including on the Oregon Coast according to ODF and wildfire managers are concerned about this forecast. The return of high temperatures, low humidity and east winds can turbocharge even the smallest fire start. A smoldering campfire or an errant spark from a vehicle can become a raging blaze in minutes, ODF said. This comes at a time when firefighting resources are also already strained in Oregon and nationally.

The last three weeks have been extremely challenging for wildland and structural firefighters. They have been working long hours in the heat for weeks at a time in an effort to contain the spread of the state’s current wildfires and keep communities safe. Many people across the state have had to evacuate or feared they might have to. And the threat isn’t over.

ODF offered a few extra precautionary tips for those working or recreating in the forest:

▪ Operate ATVs and other motorized vehicles only on established roads.

▪ Check your vehicle for dragging tow chains that can send sparks into roadside vegetation.

▪ Don’t park or idle on dry grass or brush – the hot exhaust system can set it smoldering in seconds.

▪ Check current fire restrictions for the area before building a campfire. Portable cooking stoves using liquefied or bottled fuels are allowed at any time of year. Or simplify your life by bringing prepared foods instead of trying to cook over a smoky fire.

▪ Smoke only in an enclosed vehicle. Properly dispose of cigarette butts.

In Need of Help

Chief Dahlman said the fire in Otis yesterday is currently being ruled an electrical fire caused by a malfunction, based on the events described by the victim. However, the extent of the damage made the determination of an exact cause difficult.

The family of the Otis resident has now sprung to the aid of the victim and is asking the community to do the same.

“My sister's and I bought the 5th wheel for her when she was asked to leave her previous home,” said Doris Hatch-Hatfield, daughter of the victim. “My mother lost everything. She's been living on my Aunt and Uncle's property for a few years. She lost her husband over 20 years ago. She's had a very hard life, and is no longer able to work due to disability.”

To help out, Hatch-Hatfield and her family have started a GoFundMe page. The page reads, “She walked out of the blaze with only her phone and the clothes on her back. Knowing that she would give you that shirt or anything else you might need, I‘m asking and starting a fundraiser in order to raise money for a down payment on a new trailer/home for her. Anything helps.”

With the upcoming school year just a few short weeks away, the Lincoln County School District (LCSD) and other school districts across the nat…

Did you evacuate during the Echo Mountain Complex fire?