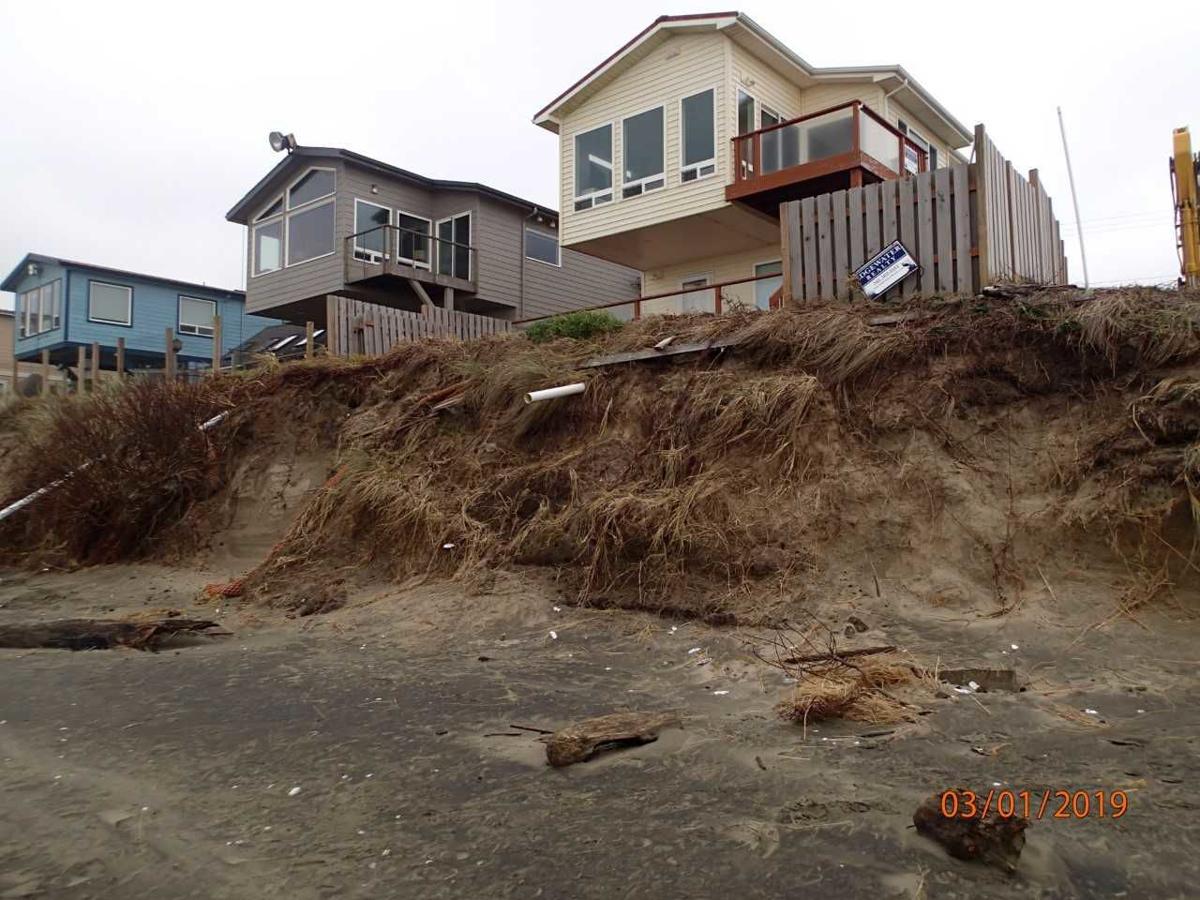 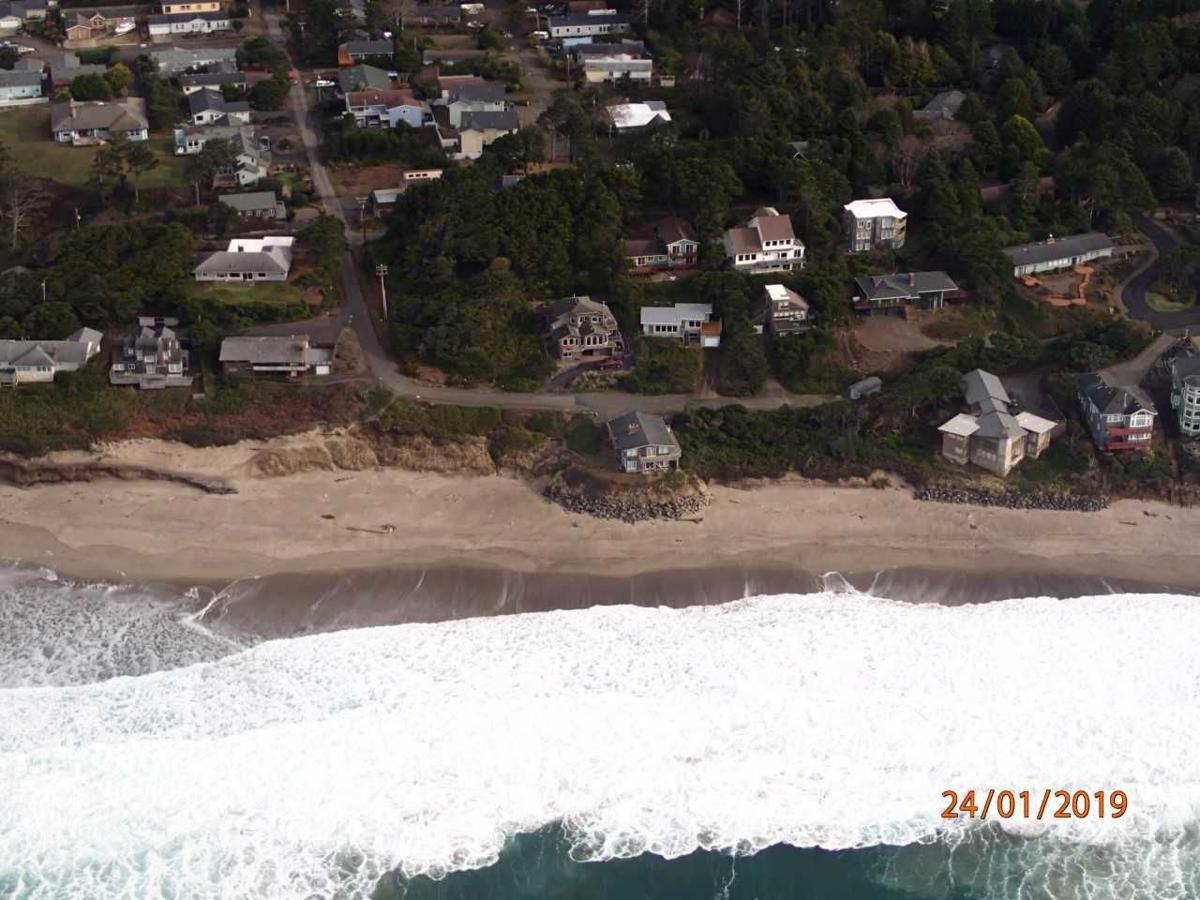 Shore Erosion: This flyover photo shows how the waves have eroded away portions of the shoreline.

Shore Erosion: This flyover photo shows how the waves have eroded away portions of the shoreline.

Beach goers and property owners in Lincoln City and Gleneden Beach are noticing more and more erosion along the shoreline.

Oregon Parks and Recreation Department spokesman Chris Havel tells The News Guard that stronger ocean waves, storm surges, and high peak flows in some rivers and creeks have increased the erosion. He said the erosion is especially severe along sandstone bluffs and other land formations that stand at a sharp, upright angle compared to the incoming surf.

“Beach erosion is a chronic hazard along many bluff-backed shorelines on the Oregon Coast,” Havel said. “Some years erosion is more of a problem than others, depending on weather and wave conditions, such as higher than average wave heights coinciding with high tides, as we have seen the last couple of years.”

Havel said many factors contribute to shoreline erosion, but the most rapid erosional episodes occur when extremely high (king) tides and high surf cause waves to reach the upper beaches and adjacent bluff or dune landforms.

Be aware of the danger

Havel said the erosion can be dangerous not just to the environment, but also it poses a threat to personal safety.

“Cliff edges can be very unsafe and their stability can change dramatically in minutes or hours – and the integrity of structures built on what may have been solid land at one point, but is now unstable due to erosion,” he said.

Havel cautioned people visiting Oregon’s beaches. Going too close to a cliff edge can cause it to collapse.

“The fall can seriously injure you (or worse),” he said. “Even solid rock may eventually give way to the ocean’s power, and even if the fall doesn’t hurt you, accidentally falling into the notoriously cold Pacific Ocean will rapidly lead to hypothermia and possibly death.”

On the beach, playing or digging close to the base of a cliff makes you a target from falling soil and other debris, Havel said.

Erosion, and other natural forces, can undermine public and private structures.

“Property owners, along or near the shoreline, should monitor the threat both in the near and long term,” Havel said. “Those who feel their homes will be threatened in the near future should contact OPRD to determine if shoreline hardening is an option to mitigate the threat.”

Havel said some of the worst erosion is occurring along Lincoln and Gleneden Beach, and the Salishan spit. However, every headland, bluff face, and beach in the county is experiencing erosion of some sort.

“While beach sand is regularly replenished by natural forces, this process can be cyclical, and you can’t assume places that have been safe in the past are going to stay that way.” Havel said. “We encourage people to keep their eyes open and be watchful of themselves, their friends and family, and their pets on every trip. The ocean shore is wild, beautiful, and natural. Complacency is the real danger.”

OPRD manages all of Oregon’s beaches as the Ocean Shore State Recreation Area. The department’s crews maintain and improve beach accesses, including signs and paths, locate and remove marine debris, patrol the beach and make safety, informational, and enforcement contacts with beachgoers along the entire coastline.

Havel said nearly all popular public beach accesses have warning signs and there are signs posted at all state park accesses, plus most city, county, and federal accesses.

Properties developed before 1977 qualify for protective structures, like riprap, according to Havel. There are other criteria to actually receive permission to alter the ocean shore, such as being in imminent peril. Riprap can change the natural forces - like sand movement - that created our wondrous shore in the first place, and Oregon law recognizes this fact by setting requirements in place to qualify for these kinds of alterations.

More information is online at https://www.oregon.gov/oprd/RULES/Pages/OceanShores.aspx.

“The ocean is more powerful than any structure,” Havel said. “The human-built part of the Coast is constantly adapting to the reality. Relocating structures is one way to extend their lifespan.

“Complacency is the real danger.”

Our friend Frank Cavezza uses his drone to show a bird's eye view of the King Tides along Roads End in North Lincoln City.

The News Guard is providing a series of reports about the Oregon Coast environment.