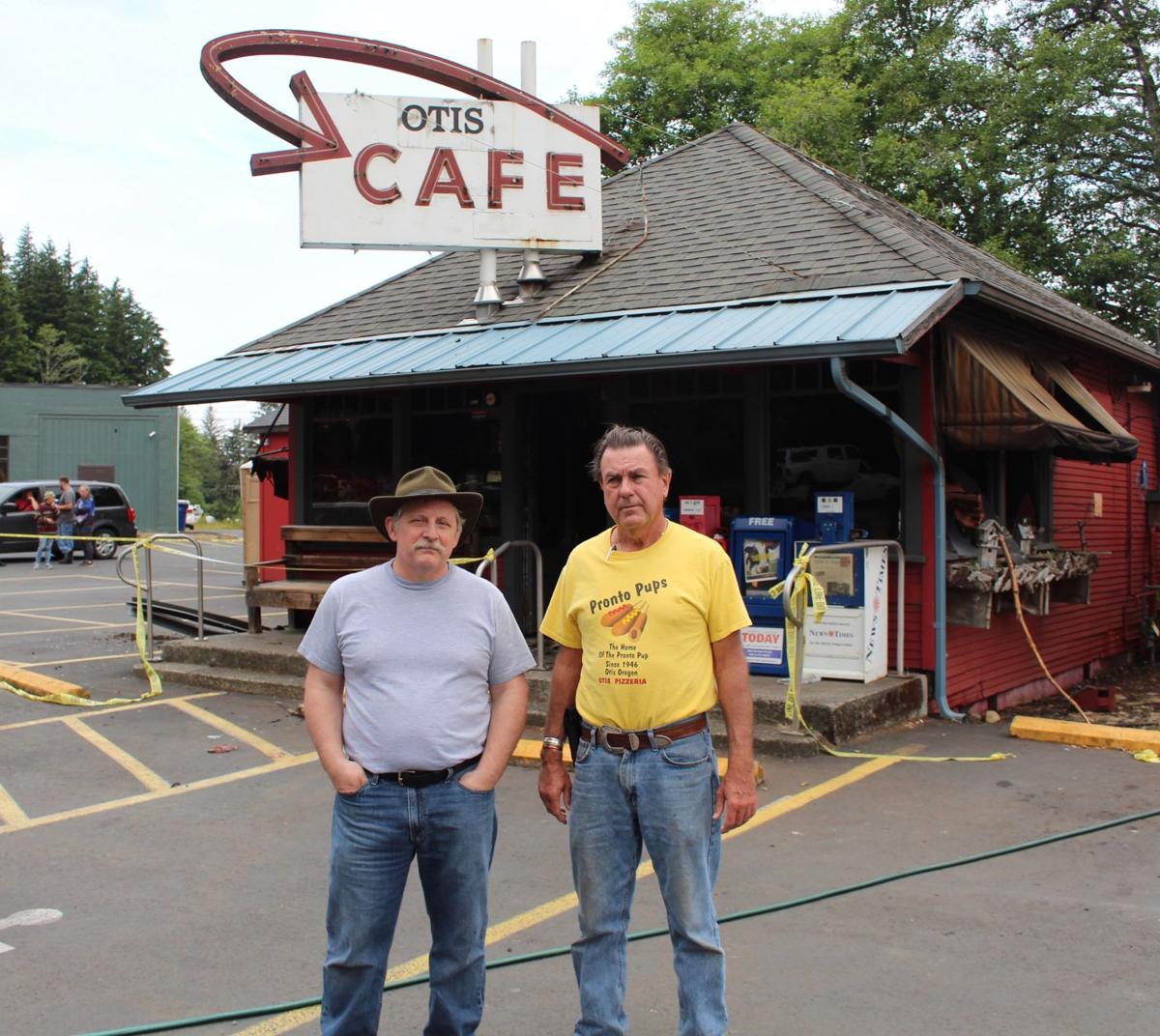 Jeff England (left) and Gary Fromm (right) have been assessing the damage at the Otis Cafe. 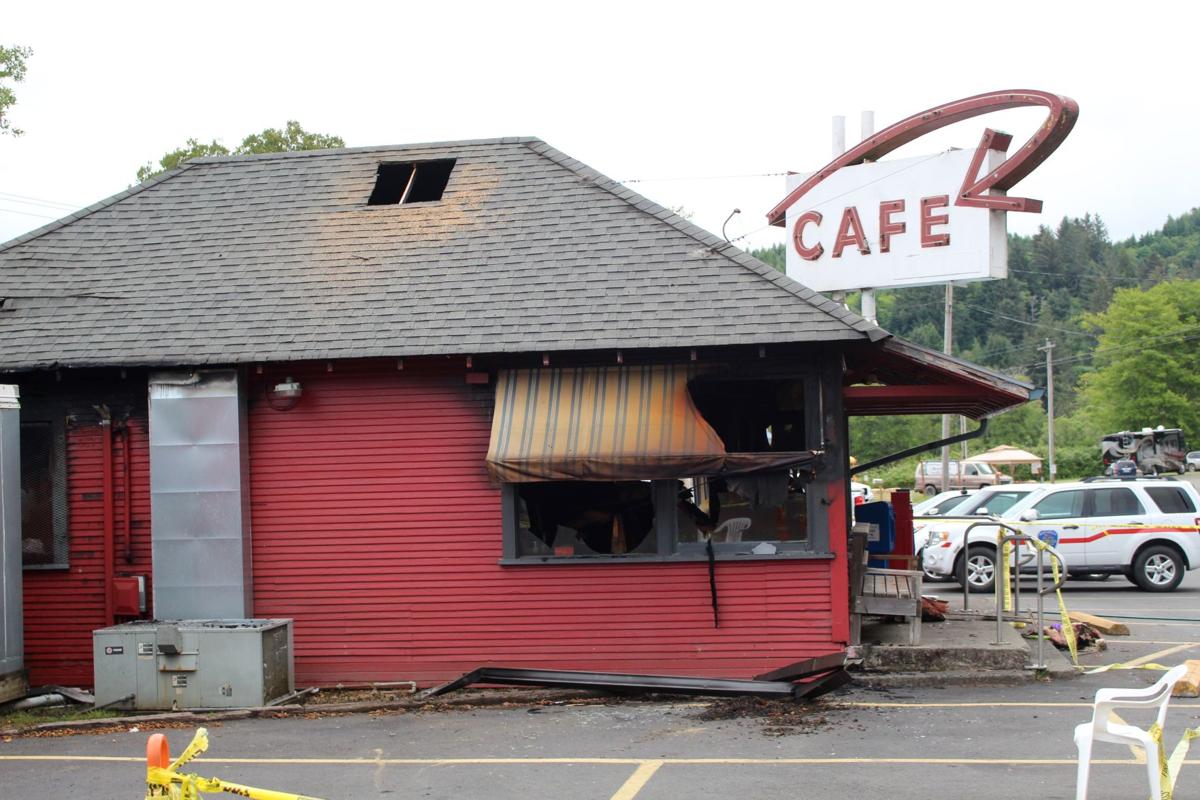 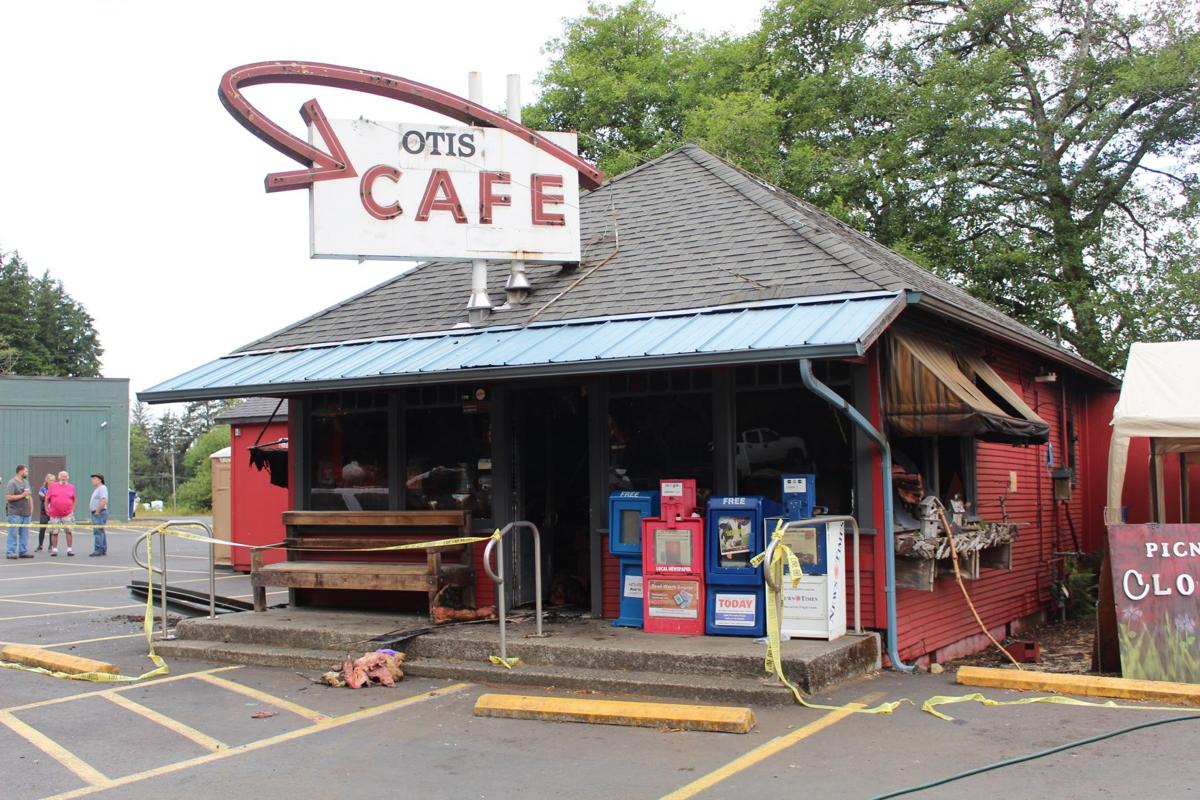 Jeff England (left) and Gary Fromm (right) have been assessing the damage at the Otis Cafe.

A coastal icon and true family business was delivered a crushing blow on Independence Day, as the famous Otis Café caught fire causing heavy damage. Although the building’s status remains uncertain, one thing is for sure: the Otis community is not going to let the Café die out.

On Thursday, July 4, there were reports of heavy smoke coming from the Café structure at approximately 7:45 p.m. North Lincoln Fire and Rescue (NLFR) was dispatched to the scene and arrived within ten minutes and had the fire extinguished in approximately 30 minutes.

The Café had heavy smoke inside the building and flames were seen from the eaves and chimney. The damage was contained to the kitchen area and attic, according to NLFR, but the smoke and heat throughout the building caused extensive damage.

“Fortunately, nobody was in there and nobody was hurt,” NLFR District Captain Jim Kusz said.

Owner of the Otis Café, Jeff England, was stunned by the news like much of the community, and the impact has been weighing heavy on his mind.

“How do you describe the numbness that this brings?” England said of his initial reaction. “We have so many employees, 24, that are all relying on the income that they’ve gained from this job.”

NLFR responded with five engines, an aerial truck, medic unit and additional staff vehicles, with over two dozen firefighters on the scene. An additional engine from Depoe Bay Fire arrived on scene and an engine from Nestucca Rural Fire and Rescue came to Lincoln City for coverage in the district for the busy Independence Day holiday.

Also one of the first on scene at the fire was Gary Fromm, the owner of the town of Otis.

“They closed at 5 o’clock and I got the call at about 7:30 (p.m.) that there was a fire,” Fromm said. “I got here about 15 minutes later and the flames were already going pretty good.”

Both England and Fromm were at the Café today anxiously awaiting the results of the investigation from the State and County Fire Marshals. They have not been able to fully examine the extent of the damage until the investigation has concluded. However, they fear the worse.

“We’re already talking about doing fundraisers for the building and equipment… I have $135,000 worth of insurance but it looks like it’s obviously going to cost much more,” Fromm, who owns the property, said. “A rebuild will cost a lot of money.”

More than a building

England has been the owner of the Café for nearly 23 years and cooked at the popular coastal hub for over eight years prior to his ownership. For him, the Otis Café is much more than just an old building that was constructed in the 1920s.

“I met my wife at the counter here, three of my four sons work for me in the café... My second son is my lead baker and his wife is a waitress, my oldest is my lead cook and manager,” England said. “This is a true family business.”

England pointed out that he has received a great deal of support from the community in the aftermath and he and Gary have already began discussing a few fundraising options that could jumpstart a potential rebuild. Some of the support has come from a few of the bands that recently played at the Otis Music Festival last weekend.

“We actually had people reach out that played here, wanting to help out in any way possible,” Fromm said. “We think we might be able to get some artists come out and do a benefit for the Café.”

Fromm and England have also discussed setting up a temporary kitchen outside and having a limited menu.

“It’s still up in the air but that would keep maybe a handful people employed,” Fromm said.

England said the fire looks to have started somewhere in the kitchen and the safe inside the Café remained secure with nothing destroyed inside, possibly ruling out an attempted theft and arson situation. The fire marshals will also be evaluating security tapes that remained unscathed, which may allow them to pinpoint a cause.

“They haven’t given me the official all-clear to look at the damage inside or an official reason for the fire,” England said. “But the community support has been fantastic… they are grieving along with us.”

Since the Otis Café is located in the Cascade Head Scenic-Research Area, land that is controlled by the federal government, Fromm fears that there will be a lot of limitation put on a potential rebuild.

“We all agree that we need to get behind this thing and fight the resistance of the state, county and federal government about rebuilding it if that’s what happens,” Fromm said.

Although the fire created a lot of damage from the smoke, the structure is still intact and Kusz said that it’s possible that it isn’t a total loss.

“It’s all still there, but it’ll take a huge effort to get it cleaned up,” Kusz said. “I’ve seen worse that have been rebuilt again.”

Regardless of what the outcome is, there seems to be no doubt that the Otis Café will be back at some point.

“There’s a lot of people that love this building,” Fromm said. “Otis Café is the heart of Otis and it's on life support, but we're hoping we can bring it back to life.”