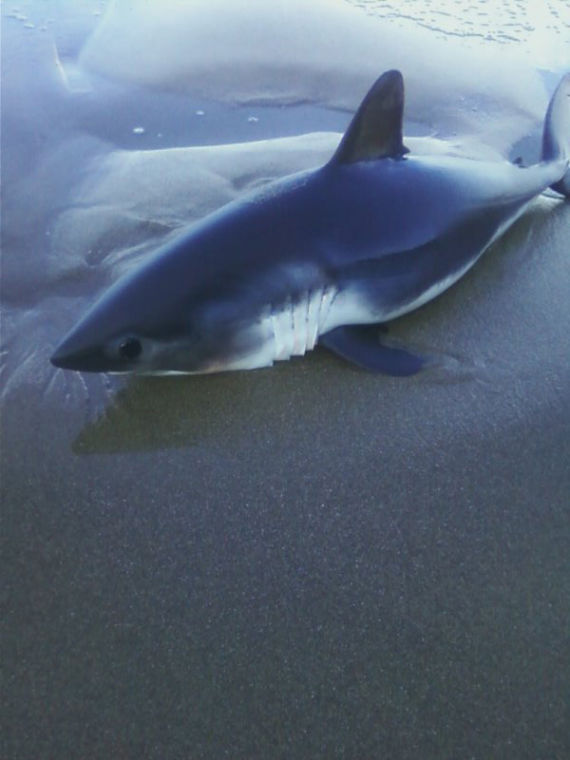 LINCOLN CITY -  Local resident Ernie Rose discovered what he believes to be a young Great White shark on the Roads End beach, about 200-300 yards before the point.

“I put it next to a 4x4x8 to give it size and as you can see it is just shy of 4 feet long.,” said Rose. “Unfortunately, the gulls had already gotten to its eyes. Otherwise it was in good shape and which makes one wonder what caused its death?

Bonnie Van Bruggen said she walking alone at Roads End Beach on the morning of Aug. 26 and this little shark washed up to shore near Elephant Head.

“He had just a little quiver left in his gills so I hoped he was still alive,” she said. “I dug his tail fin out of the sand, thinking that had trapped him. But he just rolled over when a wave washed over him and didn’t move again. “

The News Guard has sent photos of the findings to the Oregon Coast Aquarium for study. We'll let you know what they tell us.

Here are the questions we sent Erin Paxton at the Oregon Coast Aquarium and her answers:

The News Guard: What they are?

They are juvenile salmon sharks, Lamna ditropis. which range between 2-3 feet when they are born.

The News Guard: What caused them to beach at Roads End?

Salmon sharks give live birth, or “pup,” near the surf. Some of the weaker young get caught in current and waves and end up washed up on beach. Here’s a quote from our Director of Animal Husbandry, Jim Burke, “They are born and live near the coast and like all young are susceptible to their environments and therefore periodically wash up on the beaches.”

The News Guard: Are they common off the coast along Lincoln County?

They wash up every year on beaches from California to Washington.  I wouldn’t say they are common but they are present and it is not a rare occurrence.

The News Guard: What should people do if they find them?

The Oregon Coast Aquarium is always interested in these strandings and would attempt to keep a live one alive and we also utilize the dead ones for future educational dissection opportunities.

The News Guard: Is there a phone number folks can call when they do spot these on the beach?