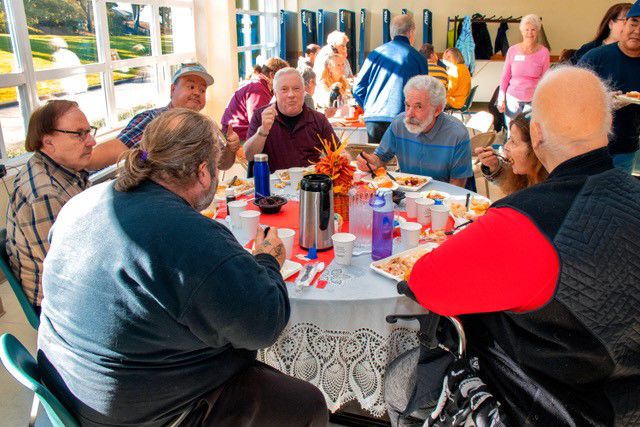 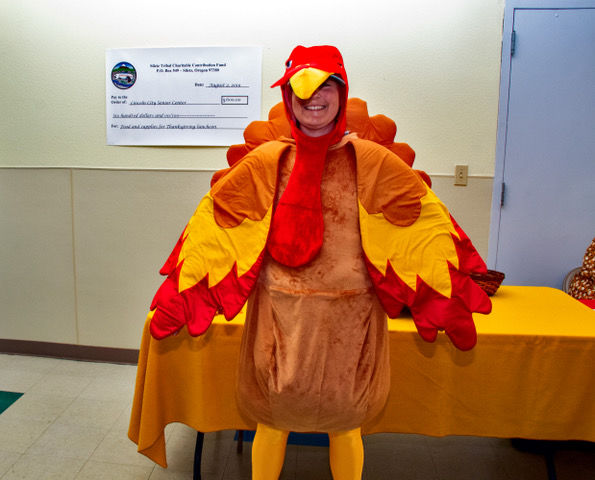 It all starts with a decision made by the Lincoln City Senior Center Board of Directors. Do we want to take on the challenge again this year? For the last 16 years, the answer has been, “Yes!”

In late spring, a grant request for $600 is sent to the Siletz Tribe Charitable Contribution Fund. They respond in the affirmative in an early August award ceremony. Planning for the luncheon the Thursday before Thanksgiving is delegated to one or two people.

Lincoln City Senior Center (LCSC) president, Anne Stephen arranged with The Beach Club and Hilltop restaurants to cook the turkeys. McKay’s Market provided the 25 turkeys with a healthy discount. Board member Lois Hartwig made decisions as to what supplies needed to be purchased. LCSC Past -President Mike O’Brian and I made the trip to Costco to purchase the 28 pumpkin pies and 288 rolls.

Sheets were displayed in the Senior Center for volunteers to sign up for setting up the tables and chairs, decorating the tables, cutting the pies, carving the turkeys, serving the food in the kitchen, running the dishwasher, waiters and waitresses to take the meals to those in attendance and a cleanup crew at the end. George and Maxine McCraw headed up the kitchen crew. Mary Hancock assigned tables for those who would take the food trays to the diners. Each server was assigned to two of the sixteen tables that were beautifully decorated for the occasion.

A little after 8 a.m. the turkey carvers showed up. Some brought their own knives to demonstrate their craft. By 9 a.m. the tables and chairs were in place and the decorators were putting on festive cloths and seasonal centerpieces. A room in the senior center was set aside for the pie cutters. By 11 a.m. the work was done. A short break before the doors opened at 11:50 a.m.

As people came in, they were welcomed and directed toward a table with available seating. Tickets for a drawing were handed out. Some left a donation in a basket that was provided for that purpose. The money donated was used to defray some of the expenses incurred by the Senior Center.

A few minutes after noon, most of the 128 seats were filled. The meals were being carried to the tables. Several people were offering coffee or tea when requested. Robert and Tamara Staples were taking photographs… lots of them.

Several staff members from the Lincoln City Community Center offered their services. Boone Marker set up speakers, so Anne could thank the people who attended and conduct two drawings for beautiful prizes. Music in the background throughout the meal provided a nice milieu without hindering conversation. Lori Templeman, adorned in a fashionable turkey outfit, greeted people as they arrived.

As things slowed down, leftovers were offered to those who wanted to take a meal home. Turkey carcasses were put in black sacks for those who requested them. Tables and chairs were put away. The floor was cleaned. The kitchen was left as found ready for “Meals on Wheels” the next day.

Several volunteers had put in a full day. They gathered in the Senior Center for a cup of coffee before heading home. The evaluation was positive. Approximately 200 meals were served. Everything went well. Those attending seemed happy.

Let’s do it again next year!

Motorists should be extra careful on Oregon highways over the four-day Thanksgiving weekend with a forecast calling for windy, cold temperatur…