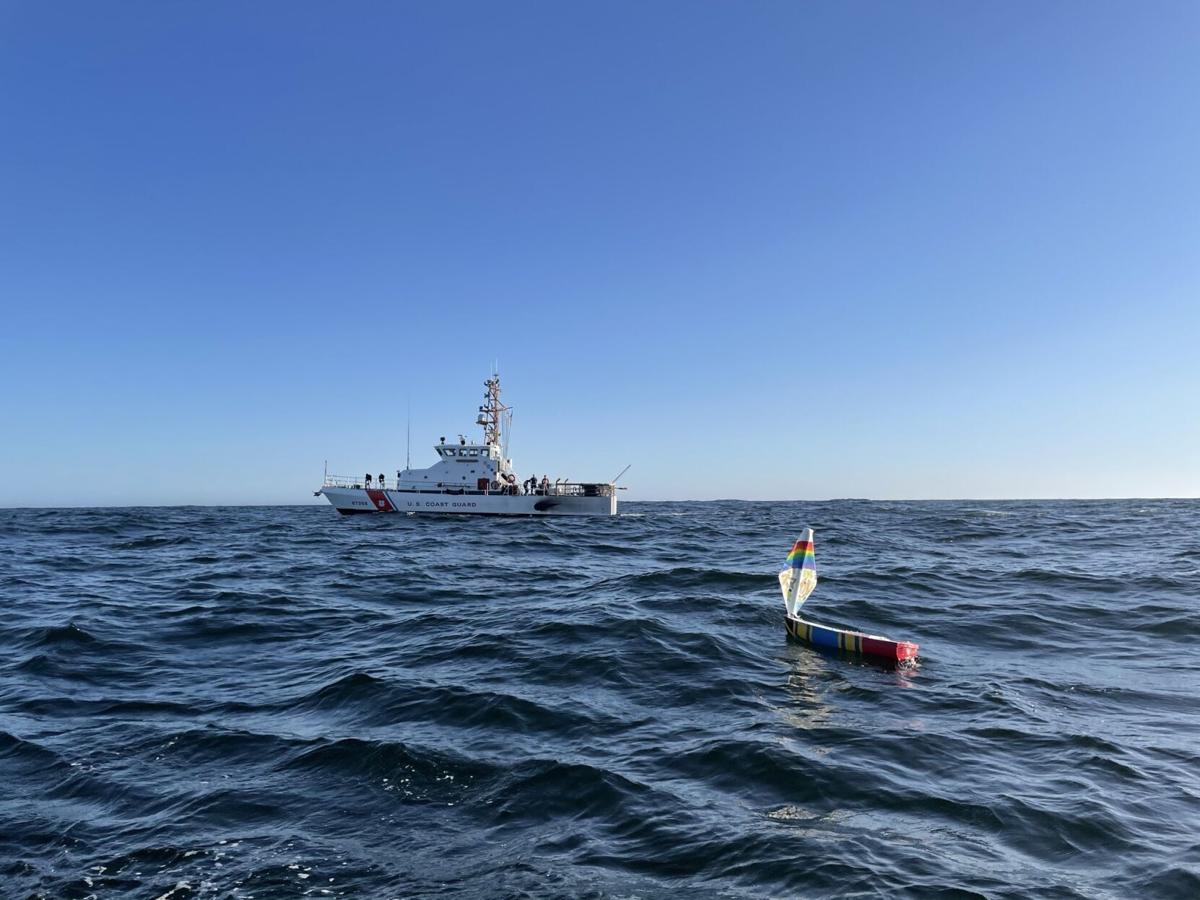 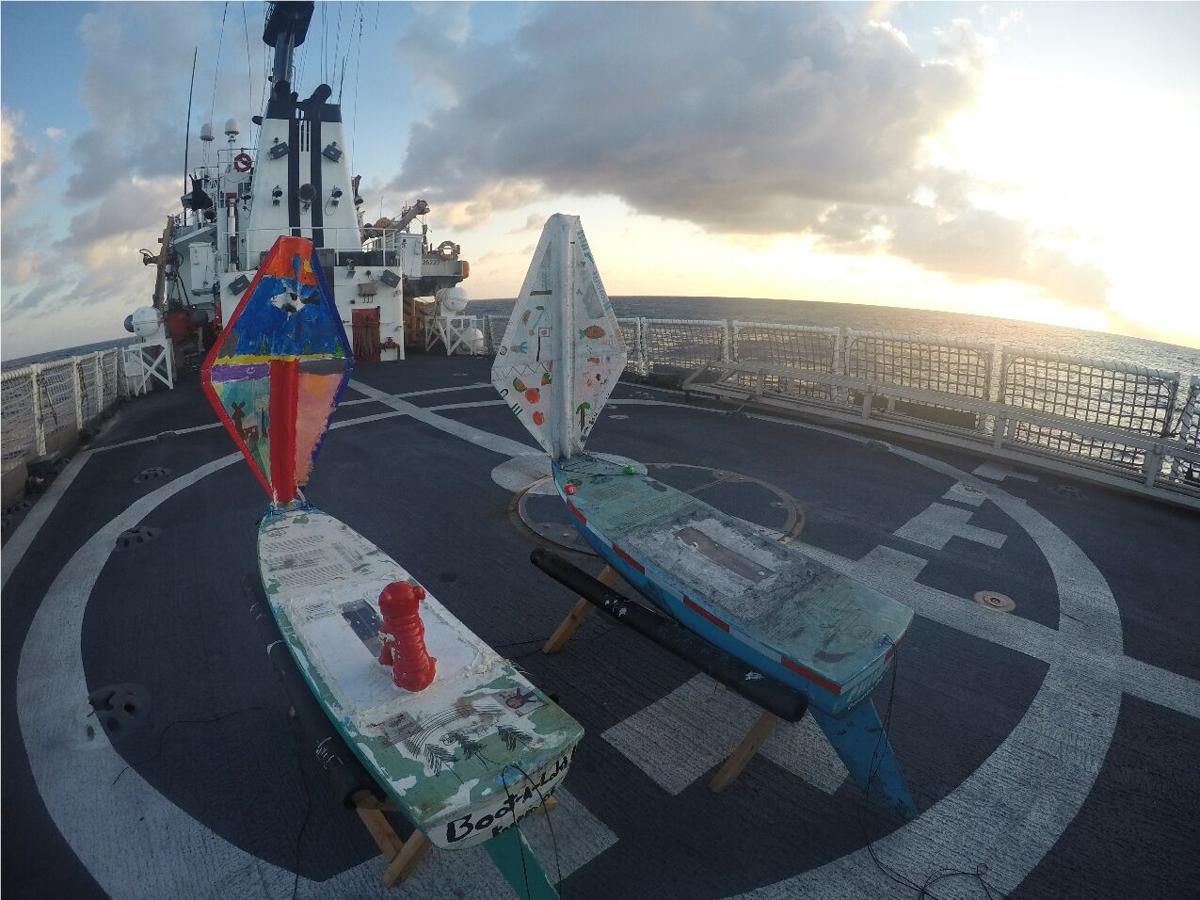 S/V PHILBERT from Columbia City Elementary and S/V BOAT-A-LAHTI from Hilda Lahti Elementary photographed on the flight deck of the USCGC STEADFAST before their 2020 launch. 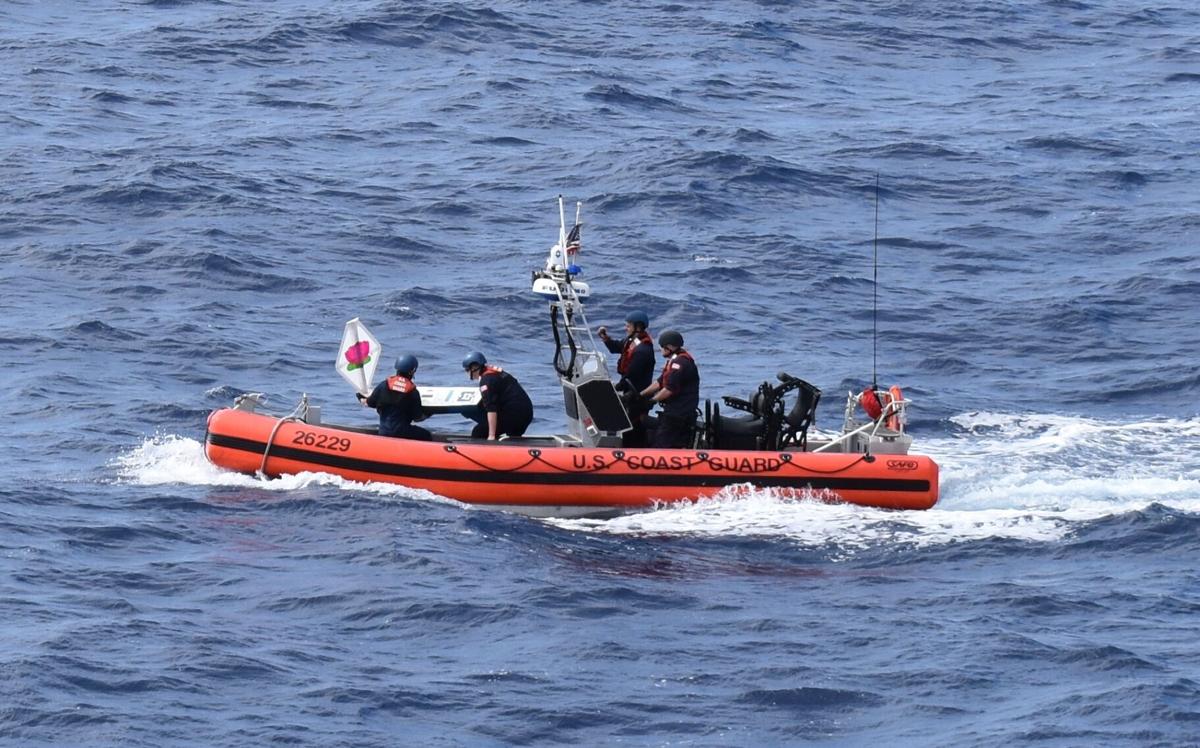 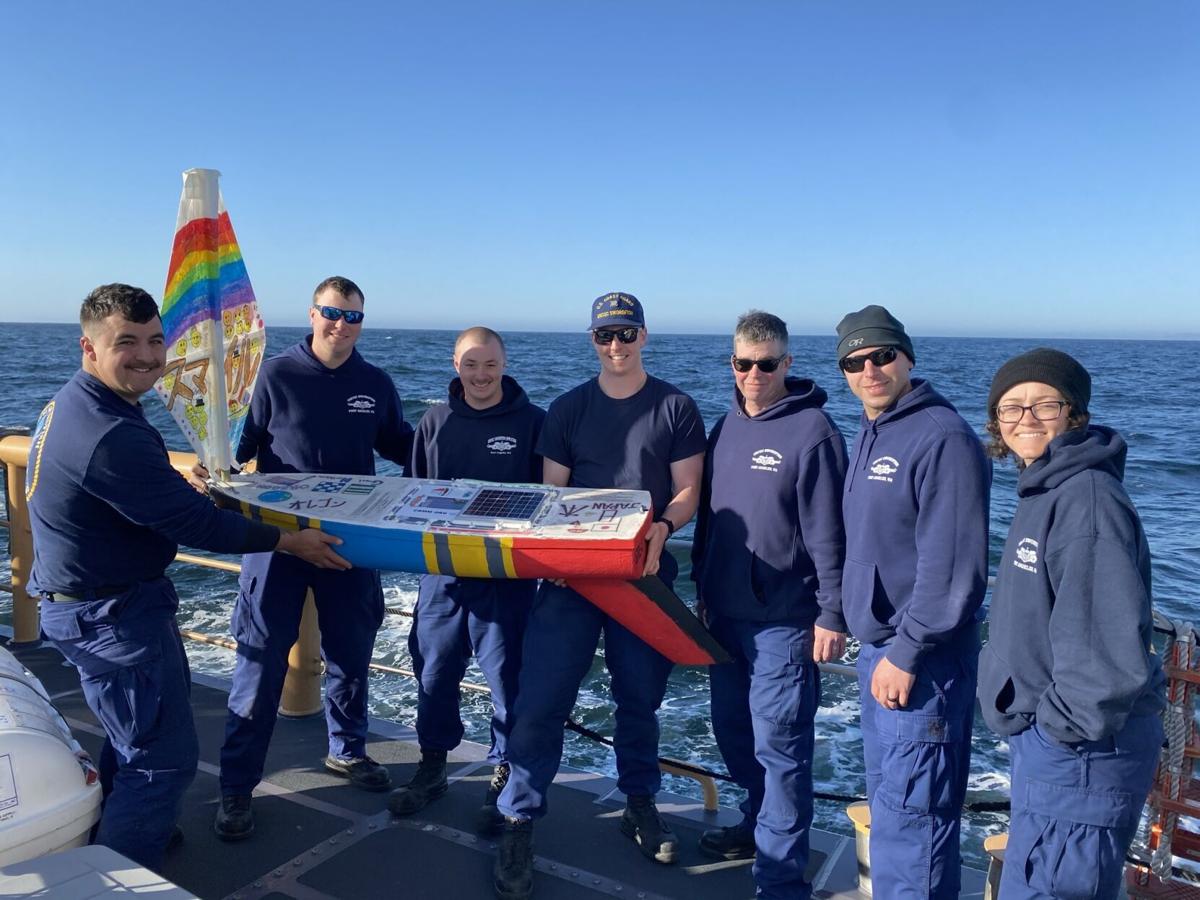 SWORDFISH crew pose with the miniboat GREAT NORTHERN before its launch.

An educational program out of the Columbia River Maritime Museum in Astoria, simply dubbed the “Miniboat Program,” often partners with the U.S. Coast Guard to launch miniboats built by elementary students.

Once launched, the boats drift on their journey to Japan, where sister schools can retrieve the boats.

Sandel created the program following the 2011 earthquake and tsunami in Japan when debris from the country washed up on Oregon and Washington shores. One of those items, a fishing vessel, is now on display at the Columbia River Maritime Museum.

That boat and its journey across the Pacific Ocean became the inspiration for building the Miniboat Program, said Sandel. Since the program’s start in 2017, 1,213 students on both sides of the Pacific Ocean have been involved in the launch of 24 miniboats, traveling a total of 55,236 nautical miles (and climbing daily). These boats are tracked daily and students are still building on the skills they honed to launch them.

The boats contain sophisticated GPS tracking systems, so that Sandel and his team can track the boat’s journey and locate the boats once they hit land (hopefully in Japan).

But most importantly, the program gives students a chance to practice thinking and making decisions for themselves.

“There’s so many things where adults are telling kids what to do. And this is a total opposite,” Sandel said. “You know the kids make every single decision about this boat on their own. No adults are telling them what to do, and then they also choose what job they want. And that way, every kid’s being engaged because some kids love the messy stuff and some kids are like ‘No, I want to write letters on the computer, and I want to study ocean products,’ so it has a spot for every type of learner in the program.”

Through the Miniboat Program, students take on roles as quartermasters, sail designers, keel engineers, cargo trackers, and documentarians. Along the way, they learn real-world skills and make friends overseas while they track their boats online, which are packed with mementos curated by the students.

“I was originally stationed in Astoria, Oregon right next to the museum, and one day in passing by the museum I saw the christening of the mini boats. I thought it was a cool initiative, so I reached out to Nate and offered to help embark these vessels and get them as close to the trade winds as possible,” Hernandez explained.

Hernandez said she has personally launched three miniboats for the program—one off Baja California, one off the borderline of Oregon and California, and one from the East Pacific Ocean.

The miniboats launch 75 miles out anywhere along the Pacific Coast, as far south as Mexico, according to Sandel—which is why the Coast Guard comes in handy.

“What’s cool about the STEADFAST and the ALERT—its sister ship that’s in Astoria—is that even though they’re homeported in Astoria, they’re actually part of the Pacific Command, out of Seattle, and their job is that they go and do narcotics enforcement off the coast of Central America. So, that’s why we’re able to get them all the way down to Mexico because it’ll take them out.”

Once a boat is launched, Hernandez sends Sandel photos and the location of the launch and Sandel sends the crew a link to the miniboat’s GPS—though sometimes she has to delay sending out the coordinates, due to the classified nature of some Coast Guard missions.

After Sandel gets the go ahead from the Coast Guard, he begins tracking the boat and sends Hernandez a link to the boat’s GPS, so the crew can watch the boat’s journey along with the museum and the students.

“Honestly, the whole crew follows along, and we laugh like little children,” Hernandez said. “The whole crew usually follows the voyage.”

The Coast Guard’s involvement with launching the miniboats also adds to the educational experience of the program, said Sandel. When miniboat PHILBERT from Columbia City was launched in 2020, the Coast Guard went the extra (nautical) mile.

“After the [christening] ceremony, which Coast Guard officers attended, they carried the boat onto the flight deck, and then officially presented it and handed it over. The officers were all in their dress uniforms, and the kids got to go all through the Coast Guard CUTTER, they got to have cookies in the galley, and they got to go to the bridge. They got to just experience a cool tour of what it’s like to be in the Coast Guard and what their mission is,” Sandel said.

Even though Hernandez is stationed in Port Angeles, Washington now, she said she still reaches out to Sandel for more miniboat missions.