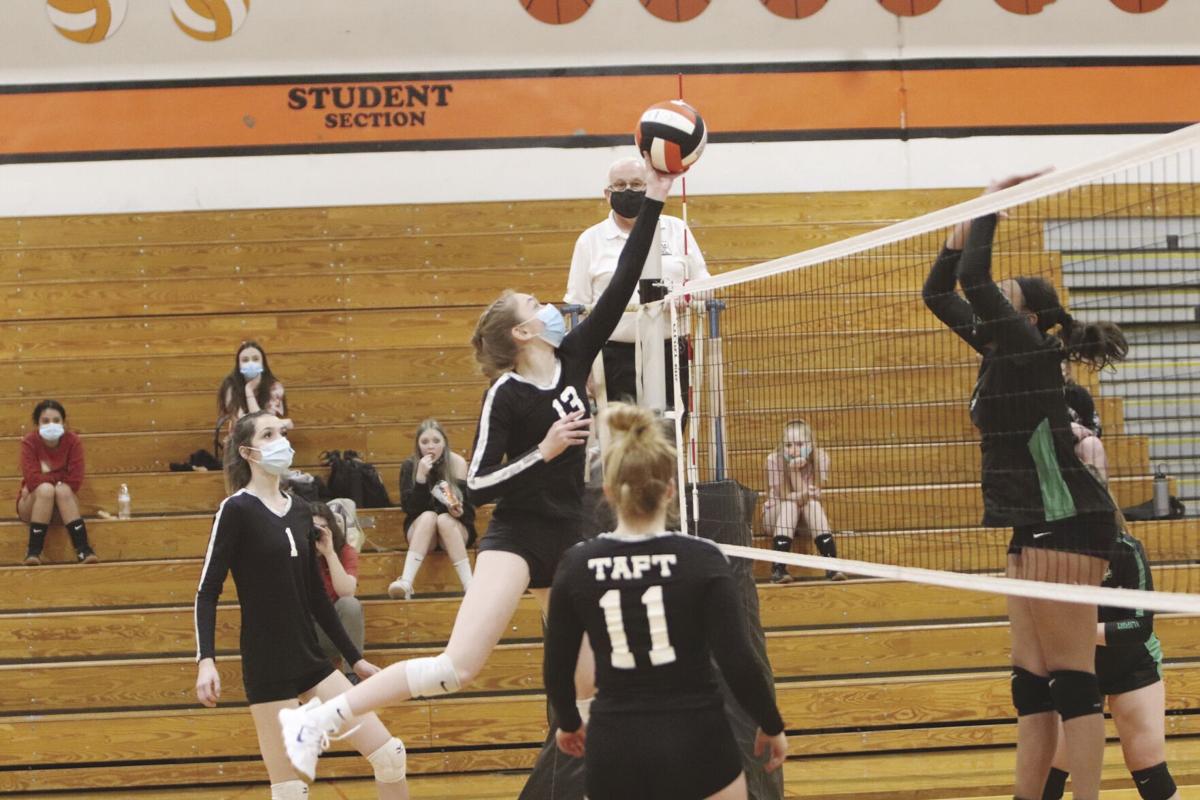 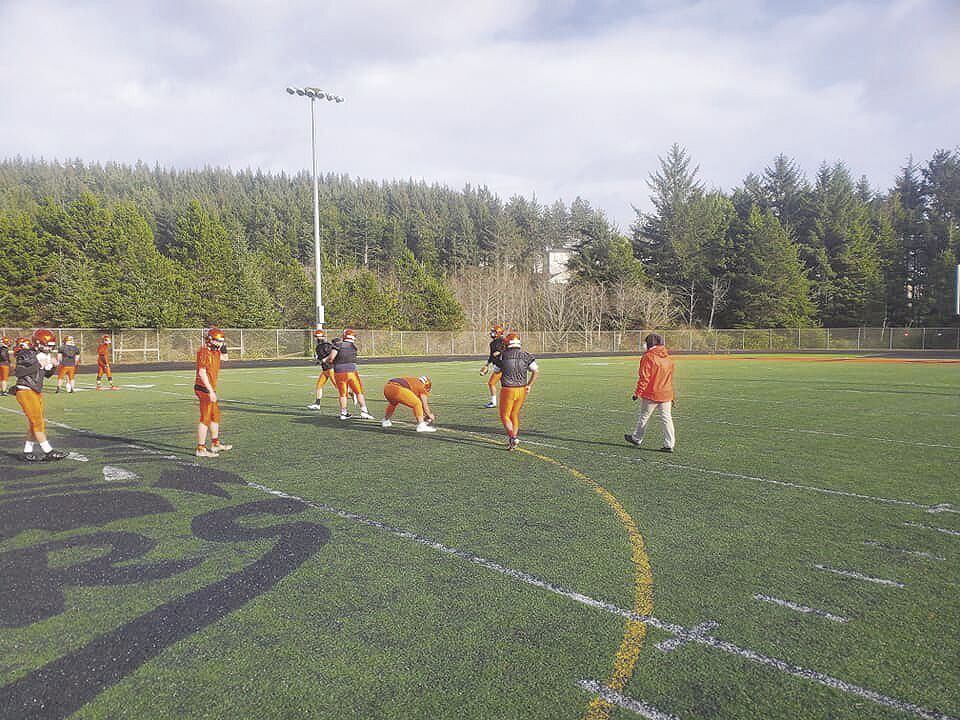 After nearly a year since the last Lincoln County competition, the Taft 7-12 Tigers were back in action last week.

A few weeks ago, the Lincoln County School District gave the green light for schools to get back to sports through OSAA’s Season 2 that includes traditional fall sports such as soccer, volleyball, cross country and football. With all teams in action last week, the Taft boys soccer team got the ball rolling on March 2 with a contest at Tillamook High School.

Facing a strong Cheesemaker squad, the Tigers were able to get a pair of goals in the game. Junior Sammy Vasquez got the Tigers on the board in the first half with a goal, followed by a second half goal by junior Angel Islas. The game concluded in a 2-2 draw.

“We knew going in, a team from up a district was going to be a challenge,” head coach Ryan Ulicni said of the 4A Cheesemakers. “We played a solid game the whole way through. So much excellent effort by every athlete.”

After such a long layoff, Ulicni said he was proud of the effort his team showed.

“Everything we worked on they showed,” he said. “We triumphed we faltered, but we never gave up. This game was a success in my book.”

There was no rest for the weary as the Taft boys were right back in action on March 3 as they traveled to Newport for a Lincoln County matchup. Down two goals at halftime, Ulicni said the boys rallied themselves to enter passing and start shooing more at the goal. Fighting some fatigue from the back-to-back games, the Tigers were fueled by four total goals from senior captain William Calderon as Taft completed the comeback win 4-3.

“That had to be the closest come from behind victory these boys have had yet,” Ulicni said. “Even with all the substitutions they managed to keep a good form. I was okay with seeing a bit of opposition being down two goals. It lets you know what your team is made of. The true definition of never give up is what makes me so proud to be a part of this team.”

Taft will host Newport this week, March 10, with a game starting at 4 p.m.

The Lady Tigers were also in action on March 3 for their first contest of the year against the 4A Newport Cubs.

The Tigers scored first with a goal from senior Avery Nightengale on a long through ball where she was one on one with the goalie. Taft took a 1-0 lead into halftime, but Newport scored two in the second half, one goal late from a penalty kick that Taft’s freshman goalie blocked but couldn’t control and a Newport striker who tapped it in to ultimately give the Cubs the 2-1 victory.

“Our goalie had her first varsity start and played well over our expectations,” head coach Joey Arce-Torres said. “MVP of our match was newcomer Ari Moralez, who played with incredible tenacity and endurance. I was extremely impressed with her skills.

“After 17 months without a match, it was exciting to see us on the pitch!”

Like the boys team, the Lady Tigers will also host Newport this week, March 10, with a game starting at 6 p.m.

The Taft 7-12 volleyball team opened the new season with a county matchup with Waldport High School on March 3. Head coach Kelsey Hart said the Lady Tigers had a great showing on the back row and played great defense against an attacking Waldport offense.

“I was really impressed with the confidence and attitudes my team showed,” Hart said. “While we made some mistakes, the girls did a great job not letting those mistakes bring them down.”

The Tigers took the first set 25-15, but dropped set number two 25-18. With strong serving from sophomore Hailey Weaver and senior Brooklyn Stamper, Taft closed out the match with a pair of 25-18 sets to win 3-1.

“I was really proud of my girls for showing great maturity and positive attitudes so early in the season,” Hart said.

This week, Taft will travel to Waldport for a rematch with the Irish on March 10. That game will begin at 5:30 p.m.

Friday night lights looked a little different last week, when the Taft 7-12 football team took on Toledo in a 7 on 7 game on March 5.

With no official score being recorded, Taft head coach Jake Tolan said he was happy to see both Lincoln County schools back in action again.

“Both teams competed and executed really well considering this was the first competitive action against an opponent since last season,” Tolan said. “I felt there were many highlights over the duration of the evening, but watching the linemen competition during halftime and then again at the end competing in their own 7 on 7 was fun to watch.”

The two squads will compete in a full-contact contest on March 19. However, the 7 on 7 gave the Tigers a good idea of what to expect from a Boomers team that had state championship aspirations in the 2A division.

“I asked them before the contest to simply compete and they didn’t let me down,” Tolan said. “They handled themselves very well against a very good Toledo team. We made mistakes, which we will learn from, but I felt the positives greatly outweighed the negative. We are excited to watch the film, improve and get better and prepare for our first full contact game.”

Before taking on the Boomers again, Taft will host Newport on March 12 in the first full-contact game. The game is scheduled to start at 7 p.m.

The Taft cross country squad was off and running for the first time this past weekend at the Ollala Valley Golf Course track in Toledo.

Competing against Newport, Toledo and Waldport on March 6, the Tigers team features 22 athletes this year with more more girls than boys for the first time in a while.

“It is exciting to have so many girls come out for a sport that is often dominated by males,” head coach Eva Ahumada said. “This year we have our returning senior Claira Tolan to lead the girls. She brings experience, a positive attitude and that tiger pride that we look for in all our student athlete leaders. She has done a great job leading our girls in practices and supporting all of our athletes in their competitions.”

Taft also has a high turn-out of newcomers this year with only seven athletes returning from the 19 member team last season. Leading the way on Saturday was sophomore Makaia Kessinger, who took third place with a time of 23:24.

“For the first race of the season, I am extremely pleased with how our athletes performed,” Ahumada said. “This is a great time for a first race and sets a promising tone for the rest of the season.”

Tolan came in second for Taft and fifth overall with a time of 24:36, which is almost a two minute personal record (PR) from her freshman season of 26:15. The high turnout of runners and strong opening performance has Ahumada excited for the season.

“This season, we will have a high focus on building the girls program and getting these girls into a position where they are confident and comfortable racing the 5k,” Ahumada said. “We are in a unique position this year, where we can really use this season almost as a pre-season training for next season. By building our girls team now, we will have most of the leg work cut out for us so that come fall season, our girls team will be extremely strong and very competitive.”

As for the boys, sophomore Cooper Fitch led the team at Toledo with a time of 20:47, which is also a PR for him. Brayan Mateo took second for the boys with a time of 21:11. Unfortunately, Ahumada said he suffered a injury in the race and will be missing the next few meets.

Freshman Enrique Islas Jr. came in third for our team with a time of 21:48, a pleasant surprise for the Tigers.

“Enrique ran one of the smartest races on the team, especially for his very first,” Ahumada said. “He has a lot more to offer and will be a key player on our varsity team as we look towards districts.”

Junior Zander Hryczyk also had a PR Saturday of over a minute to round out the Tiger’s effort.

The Taft cross country team also welcomes a new coach in Peter Doll. Coach Doll comes to Lincoln City from Missouri, where he coached cross country for a combined total of 27 years.

“His wealth of knowledge and experience has only made our team stronger and has been extremely invaluable,” Ahumada said. “I have so much to learn from him and really appreciate him helping out with our team and whipping these kids into shape. Together, we look forward to really creating and establishing a solid cross country program at Taft High school that future athletes will be excited to be a part of.”